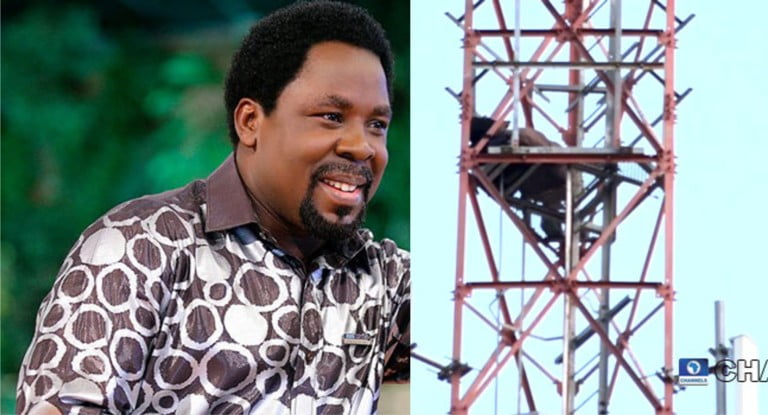 A yet-to-be-identified man has climbed a telecommunications mast in Jalingo, the capital of Taraba state and has threatened to jump off the mast except Prophet TB Joshua, the founder of Synagogue Church of All Nations (SCOAN) intervenes in his situation.

A report monitored on Channels Television by Naija News, quoted eyewitnesses to have said that the man was seen approaching the mast with chains around his waist without people knowing that he had the intention of climbing the mast.

The television station quoted Mohammed Aminu and Suleiman Musa who witnessed the scenario, to have said that they suddenly discovered that the man was already at the peak of the mast.

“He began to shout and throw down papers with a short message entitled ‘To Whom It May Concern’, the eyewitnesses said

One of the eyewitnesses, Aminu who is working as a guard told newsmen that he did not when the yet-to-be-identified man climbed the mast but this is the first of its kind. 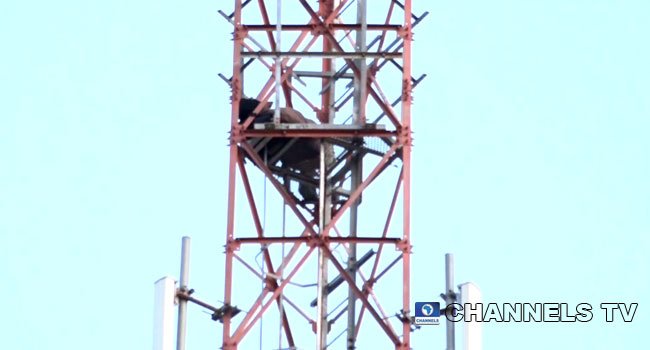 “He was throwing down some papers which were picked by some persons,” the guardsman narrated.

The report says the man, however, made a demand that he would only terminate the suicide mission if Prophet TB Joshua intervened in his case.

The inscription on one of the papers read, ”People of God, I need your prayer for my safety. As Zacchaeus climbed the sycamore tree to see Jesus Christ out of the crowd, fortunately, he got his salvation from God.

“After so many revelations about SCOAN, I am not coming down from this place until prophet T.B. Joshua asks me to come down. This is my last hope even if it is the last thing that I will achieve in life, so be it.

“Please and please prophet of God, help and deliver me for God’s sake.” 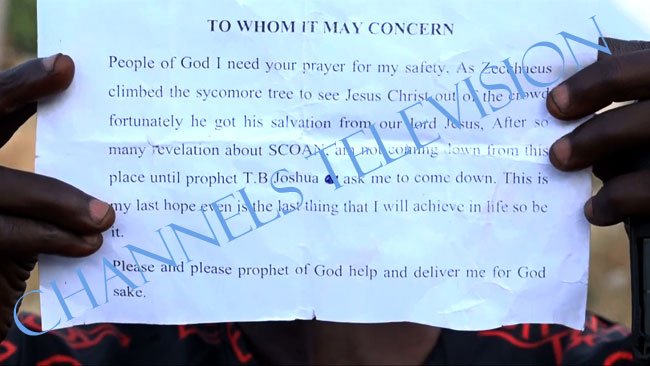 Meanwhile, the report added that security stormed the scene in an attempt to bring the man down in the dark without any iota of light.

The security team maintained that the strategy is to avoid suspicion by the victim and prevent him from jumping off the mast.