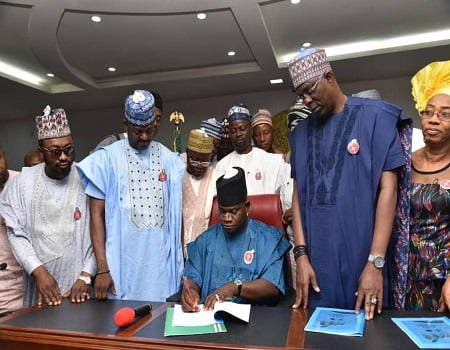 Kogi State Governor, Yahaya Bello, has signed into law the 2020 appropriation bill tagged “Budget of Prosperity” at the banquet hall of the Government House, Lokoja, the state capital.

While signing the budget, Governor Bello said his foremost gratitude was to the Almighty God and the people of Kogi State for coming out en mass to re-elect him as governor for another term of four years. He commended the support, diligent and timely approval of the appropriation bill by the State House of Assembly, adding “the signing of this year budget was most timely.”

According to the Governor: “The timely approval and passage of this budget by the House have further shown the commitment of the members to the development of the state. It also displays the cordial relationship that exists between the Executive and Legislative arm in Kogi State.