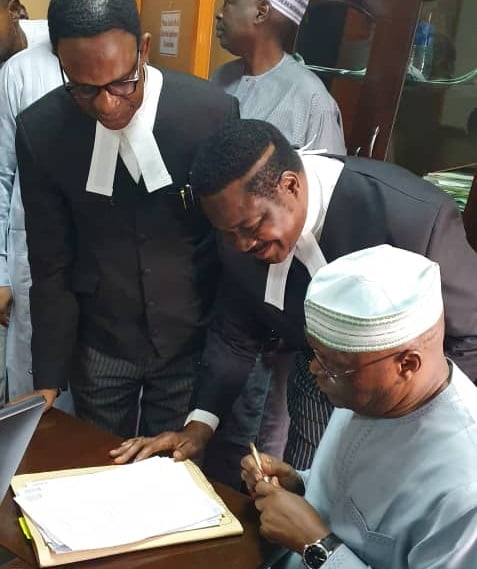 Apparently displeased with the latest treatment meted out to the former head of the nation’s judiciary, Ozekhome in a statement on Saturday, December 14, asked President Buhari what else he wanted from the same man that was embarrassed out of office.

Atiku’s lawyer advised the Federal Government to allow Onnoghen to live in peace and stop kicking someone already on the floor.

His words: “The fresh news (of course usually very negative from this government) is that retired Justice Onnoghen’s passport has been seized and that he has been barred from traveling abroad.

“The government should immediately rescind this ill-advised decision which simply amounts not just to an overkill of a revered Supreme Court Justice already totally humiliated through forced removal from office, without being found guilty of any crime; it also suggests vendetta and vengeance carried too far.

“What is Onnoghen’s crime? That he served his country faithfully, diligently and probably stepped on some sensitive and untouchable toes? That he was forced out of the office without first being found guilty of any crime?

“That it took the Court of Appeal over two months to deliver judgment affirming his not being given a fair hearing, only after he had been humiliated out of office, a case of shutting the stable after the horse had bolted?

“That he was seen as a cog in the wheel of the then-forthcoming February 23, 2019, presidential election over which he was expected to play a prominent role, and had to be booted out on 29th January?

“Having inflicted these irretrievable punishments on him, can’t this government allow him peace to pick up and sew together the shredded pieces of his life’s garments? Must it extract a Shylock’s pound of flesh?

“Must it continuously kick a citizen already lying prostrate on the floor, on the ass? To achieve what? To please and satisfy the bacchanalian appetites of which unseen gods, goddesses, and deities? How does a government fight and humiliate its own citizens rather than save them?

“What self-contradiction for the same government mouthing anti-corruption to be praising an Abacha whose looted funds are still being retrieved from bank vaults across the globe over two decades after his death?

“Mr. Government sir, please, let Hon Justice Onnoghen be. Give him peace. I beg of you. Having not prosecuted him and get him convicted, accord him his full inalienable and fundamental rights,” the senior lawyer said.