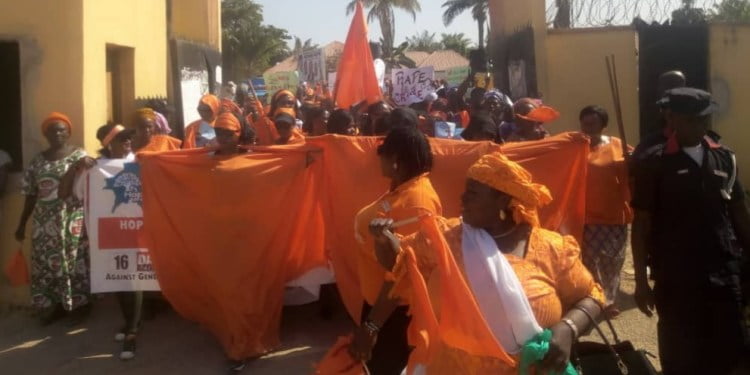 Disturbed by the ever-increasing cases of gender-based violence in Taraba, wife of the state   Governor, Mrs. Anna Darius Ishaku, has led women groups on a protest against the abuse of their rights which they said have impaired their participation in politics and decision-making.

The protest which was taken to the Legislative, Judicial and Executive Arms of Government in the state seeks laws that will protect victims of abuse and hold offenders accountable.

The women in their number who dressed in orange –color attire, took to the major roads of Jalingo, the state capital and presented their petitions to the leaders of the three arms of government, as part of the 16 days activism against gender-based violence.

Their protests led them to the Taraba State House of Assembly as their first point of call, where they were received by the Speaker and tendered their petition.

‘’ We are asking you, our great lawmakers to sign the bill before you, seeking the domestication of the Administration of Criminal Justice Law in Taraba,’’ they plead.

The protesters also urged the Assembly to ensure the speedy passage of the bill, in order to protect women and girls against abuse.

Speaking, the First Lady, represented by the Provost College of Agriculture, Dr. Elizabeth Wachap, also demanded stringent punishment to perpetrators of violence against women and girls, just as they want to abuse of women treated as a criminal offense and not given a liberal interpretation.

Responding to their demands, Speaker of the Assembly, Joseph Kunini, explained that the Administration of Criminal and Justice Law was already undergoing a review.

” Violence against women is an evil and gross violation of human rights, which stands to be condemned.

“Taraba State House of Assembly is women-friendly and has resolved to uphold the fundamental rights of women,” Kunini said.

The Speaker also applauded the wife of the governor for leading the campaign for the inclusion of women in the scheme of things and protection of their fundamental human rights.

At the secretariat of the Nigerian Bar Association (NBA) in Jalingo, the state’s Chief Judge Filibus Andetur promised to dispense justice speedily and do the needful to protect the rights of women as citizens who deserve equity and transparency.

A co-leader of the protest, Dinatu Dodo, demanded the implementation of the bill if passed into law by the State House of Assembly and promised that the women would remain law-abiding.

Although they noted that Governor Darius Ishaku was not gender-biased in the discharge of his administrative responsibilities, the women called for more female appointment into his cabinet.

In his remarks, Jellason promised to deliver their petition to the governor, adding that the state government frowns at gender-based violence and would wage war against it in all ramifications.

According to the United Nations’ statistics on women, 28 percent of women in Nigeria between ages 25 to 29 have experienced some form of physical violence since the age of 15.

This has in no small measure brought about discrimination and the women have demanded an end to the recurring phenomenon of violence against the girl child and other gender-based violence as they want perpetrators to be named and shamed.