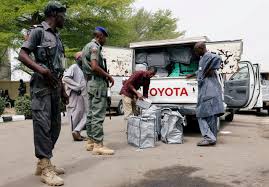 Earlier there were reports peddled that sensitive election materials for Gombi and Hong Local Government Areas have been diverted.

Speaking to reporters on the allegations the Chairman of the Commission,  Isa Shettima said,” the only thing that the Commission knows is that all the sensitive electoral materials distributed today have reached the headquarters of the 21 LGAs.

“I did not hear of the diversion of any diversion.

” Adamawa has 2,609 polling units and at every unit, we have posted a Presiding Officer, Polling Clerk, and Polling Orderly with the support of the security operatives for the conduct of the exercise, “he further.

Naija News reports that few hours to the election, a new Commissioner of Police, Philip Maku, deployed to the state to oversee the election.

The new Commissioner on Friday had assured the public of adequate security for the exercise “I am deployed to Adamawa to oversee the forthcoming local government election scheduled for tomorrow, December 7.

“I  want to assure members of the public that deployment of policemen and other securities from sister security agencies is done to cover all polling units across the state to ensure the electorate cast their votes without being harassed or intimidated.

“Let me equally warn that no form of election rigging, thuggery or violence would be allowed to disrupt the election process.

“There is going to be Stop and Search, patrols and monitoring of election process in the entire state to apprehend anyone that is out to cause the breakdown of law and order,” Maku said.