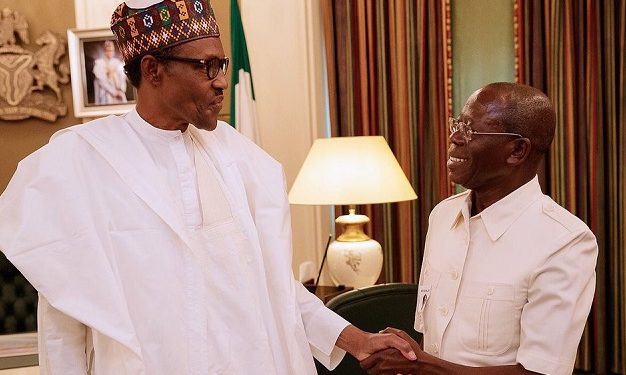 President Muhammadu Buhari on Friday met with the National Chairman of the All Progressives Congress (APC), Adams Oshiomhole and state chairmen of the party.

Naija News reports that President Buhari on Thursday met with APC governors at the State House in Abuja, Nigeria’s capital.

This online news platform understands that the APC governors were led to the meeting by Atiku Bagudu, the Governor of Kebbi State, north-western Nigeria.

The meeting was also attended by Vice-President Yemi Osinbajo and the Chief of Staff to the President, Mr Abba Kyari.

The meeting IS believed to be efforts geared toward resolving the crisis in the ruling party.

It was gathered that Oshiomhole arrived at the Presidential Villa about 11.30 am, looking excited as he responded to greetings from Department of State Services (DSS) operatives by the entrance to the Council Chambers.

Edo State, which happens to be Oshiomhole’s home state, has been engulfed in crisis between loyalist of the APC chairman and the Governor of Edo State, Godwin Obaseki.

The crisis has resulted in the Edo state APC splitting into factions, with the chairman of the faction of the party loyal to Oshiomhole, Mr David Imuse, also attending the meeting with Buhari.

However, the chairman of the factional loyal to Obaseki, Mr Anselem Ojezuz, was not sighted at the meeting before it went into closed-doors.

The meeting started at 12 pm.