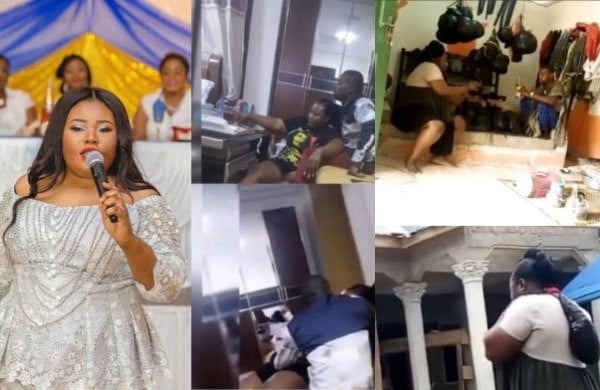 Ghanaian gospel singer, Ohemaa Jacky is currently trending for the wrong reasons after she exposed by her best friend, Tracey Boakye who accused her of undergoing rituals for fame.

Tracey Boakye leaked the video on Instagram as a form of revenge against the gospel singer took her to the cleaners for exposing her boobs at a gospel singer, Brother Sammy’s album launch.

Gospel singer, Ohemaa Jacky shamed after her ex-best friend shared a video of her allegedly undergoing rituals for fame

In the leaked video, a woman purported to be the gospel artiste is seen chanting and invoking some spirit as part of the rituals to get a hit song and suppress the progress of the other colleague musicians.

The actress who claimed that Ohemaa Jacky met Nana Showboy at the hotel after she contacted him for help to become a big star in Ghana as a gospel musician, also claimed that they had rounds of sex before she got fingered.