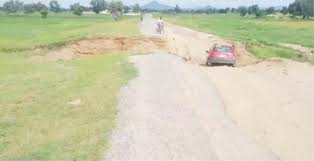 Binyeri Community in  southern Adamawa have urged Gov. Ahmadu Fintiri of Adamawa state  to as matter of urgency reconstructs the failed 58 km Mayo-Belwa Binyeri road abandoned for over 29 years.

Naija News  reports that the area has an estimated population of about one million with four major local markets and two motor parks generating a conservative N3m monthly for the Local and State Governments.

Spokesman of the  community Mr Suleiman  Mohammed-Tola on Thursday decried   that the road was first constructed in 1981 by the administration of late Governor Abubakar Barde in the defunct Gongola State under second republic to connect Taraba State, but had suffered neglect for decades.

‘’This road was first constructed by the late Gov.Barde since defunct Gongola, but had been neglected for almost 29 years now.

“This road links Sebore-Tola-Binyeri totaling a distance of 39.8km with four (4) bridges and twelve (12) culverts. However, one of the bridges and three culverts had collapsed due to floods at Dayino and Tasau villages thereby making life unbearable to the residents, visitors and motorists plying the route,’’ Mohammed-Tola cried out.

While commending the Federal Government for embarking on the reconstruction of 18-km Mayo Belwa- Sebore road, Mohammed-Tola also urged President Muhammadu Buhari to ensure the early completion of the Mayo Belwa-Jada road project.

He said Tola-Binyeri District is endowed with solid mineral deposits in commercial quantity.

“Barite, iron, mica, marble, granite, tantalite, magnesium, limestone, uranium, and gypsum, among others, are being mined unconventionally at the Gambe and Pola hills.

“Our people are largely agrarian as we excel in farming and livestock,’’ he said.

He equally appealed to the state government to restore normal electricity to Tola and Binyeri by fixing failed polls and transmission lines as well as the installation of high-grade transformers to improve the living standard of the people.