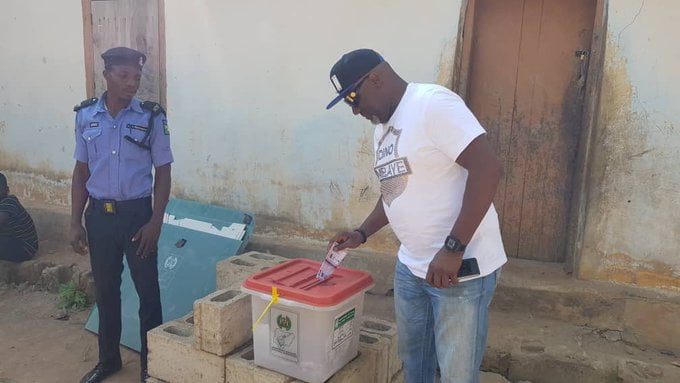 Speaking earlier today after casting his vote, Melaye said he will head to court if INEC does not review the initial poll. “What we have as result is fraud… a major fraud,” he said.

Naija News  Recall that the election on November 16 was cancelled in a number of polling units as a result of violence, ballot snatching and intimidation of voters which marred the process.

The PDP candidate asked INEC to postpone the exercise, alleging that the electoral umpire did not include some of the polling units that were cancelled during the November 16, election in the forthcoming rerun. Melaye also accused the electoral umpire of accepting his complaint but failed to work on it

Naija News understands that the  People’s Democratic Party (PDP) lawmaker Dino Melaye had earlier written to the Independent National Electoral Commission (INEC) demanding the electoral body to maintain status quo.In a letter written on his behalf by his lawyer, Ricky Tarfa & Co and signed by Rilwan I. Idris, Melaye told INEC that there was a pending suit before Justice Ekwo of the Federal High Court 5, Abuja.

The suit, according to the letter dated November 28, was accompanied by motions for an interim and interlocutory injunction restraining the Commission from proceeding with the supplementary elections of the Kogi West Senatorial District.

Melaye informed INEC that some polling units and wards where the rerun election was canceled were not included in the elections register for the supplementary elections scheduled to hold on November 30.