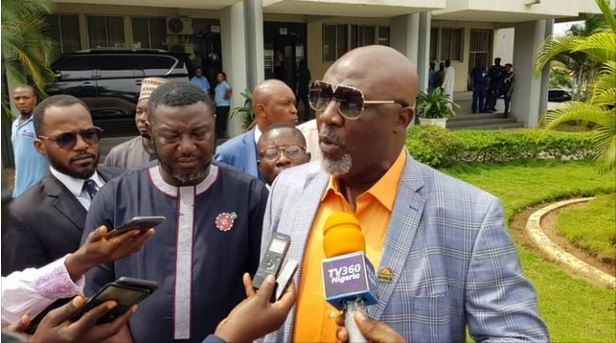 Naija News reports that Senator Melaye made this called while addressing journalists at INEC headquarters in Abuja, Nigeria’s capital on Wednesday, where he submitted another petition against the rerun poll, having first asked the commission to cancel it.

Citing reasons for his decision, the PDP senatorial candidate said the election should be postponed until “infractions” in the November 16 election are resolved.

The controversial senator said he returned to the commission because it is yet to respond to his petition and that no panel has been set up to investigate his allegations.

His words: “What is new in what we have submitted today is that we have attached a copy of form EC8B of ward A in Lokoja Local Government area, where INEC, during collation, had cancelled results of nine out of 23 polling units in the LGA,” he said.

“What we are saying is; how can INEC cancel these polling units during collation process and they will not be captured in places where rerun will take place?

“We believe this is an aberration, and the INEC chairman cannot know about it and allow it to stay.”

The Senator also accused INEC of turning a blind eye to irregularities in some other places during the rerun election.

“Unfortunately, results were returned in those places,” he said.

“We are saying that INEC must be neutral and cancel elections in areas where there was violence.

“I want to say that with all these fractions put together, INEC must, as a matter of transparency and national interest, postpone the Saturday supplementary election.”

Meanwhile, the rerun between Melaye and Smart Adeyemi of the All Progressives Congress (APC), Nigeria’s ruling party, was inconclusive, and INEC fixed a final match between the duo for Saturday, November 30.