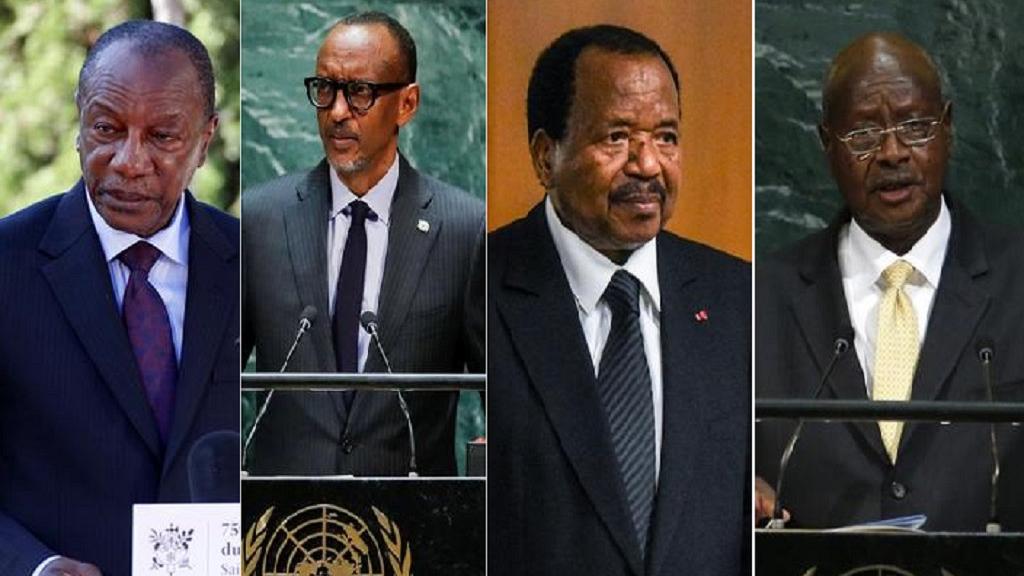 Guinean President Alpha Condé has become the last African head of state to seek the extension of his legal mandate, an initiative that has sparked protests in the country last week.

If Alpha Conde attempts to seek a third term in 2020, he would be inspired by a game manual established in Africa, where presidents-in-office have sought, often successfully, to stay in power by massaging, bypassing or breaking laws. often intended to ensure democratic transfers of power.

Below you will find details of how some of the oldest African leaders have managed to stay in power, or are trying to do so, reducing the hope of dawn of democracy on the continent.

Condé’s second and final five-year term expires in 2020, but the 81-year-old leader has refused to rule out the possibility of standing for re-election. In September, he asked his government to examine the likelihood of drafting a new constitution, raising concerns about his candidacy. Alpha Condé was elected for the first time in 2010.

Nkurunziza, who has been in power since 2005, announced in 2015 that he would run for a third term, which his opponents considered a violation of the constitution, which actually allowed only two terms. Since his re-election, hundreds of Burundians have been killed in clashes with security forces and half a million have fled abroad.

A referendum in May 2018 overwhelmingly approved changes extending the presidential term to seven years. Under the new constitution, Nkurunziza is now able to serve two more terms, potentially extending his rule until 2034. The opposition rejected the results and the United States said the voters had been intimidated. during the electoral process.

Biya, 86, and the oldest leader in sub-Saharan Africa, took over the presidency in 1982. The National Assembly passed a constitutional bill in April 2008, removing the two-term presidential term to allow it to extend its term. He has won two elections since then, but opposition candidates have described the elections as fraudulent.

Deby has ruled Chad since coming to power following a 1990 coup. A 2005 referendum removed a two-term limit on the constitution. Parliament approved a new constitution in 2018, re-imposing the two-term limit, but it will not be applied retroactively, which means that Mr. Deby could serve two terms after the next elections in 2021, possibly up to to 2033.

The president, a former army officer who took power for the first time in a coup in 1999, won a referendum in 2018 to extend the term of office and put an end to a rotation system. powers between the three main islands of the archipelago off the coast of Africa. The vote allowed him to run for two more five-year terms. The opposition rejected the referendum.

The constitution in the Republic of Congo was amended by referendum in 2015, lifting the mandate and age limits that would have prevented President Sassou from representing himself. He won a new five-year term in the 2016 elections, although the opposition rejected the results, alleging fraud. Denis Sassou Nguesso has been in charge of the Congo since 1979 except for a five-year period (1992-1997) when he lost the election against Pascal Lissouba.

Legislators in Djibouti approved a constitutional amendment in 2010 that allowed Guelleh, who has been in power since 1999, to run for a third term. He has already won two elections.

Ouattara, who has been in power since 2010, said the adoption of a new constitution in 2016 would allow him to run for a third term in the 2020 presidential race, as a new constitution would mean that the first two terms do not count. He has not yet said whether he will represent himself.

In 2015, Rwandans voted to extend the two-term limit of the Constitution. According to the changes, Paul Kagame can hope to run for a term of seven years and two more five years thereafter, eventually to remain in power until 2034.

Kagame, who won a third term in 2017, has been criticized for what human rights groups call widespread abuse, muzzling independent media and repression of the political opposition. He denies having committed wrongdoing. He came to power for the first time in 2000.

Togo changed its constitution in 2019 to cap the two-term presidential term of five years, apparently in response to opposition calls at the end of the political dynasty that began when Gnassingbe’s father took power at the end of the war. a coup in 1967.

However, it does not take into account the three mandates that Gnassingbé has already filled since he came to power in 2005, the last of which ends in 2020. He could, therefore, remain in power until 2030.

Museveni has been leading Uganda since 1986. A clause limiting the number of terms that would have prevented him from seeking re-election was removed from the constitution in 2005. In 2017, legislators voted in favour of removing the constitutional limit of the age of a presidential candidate.