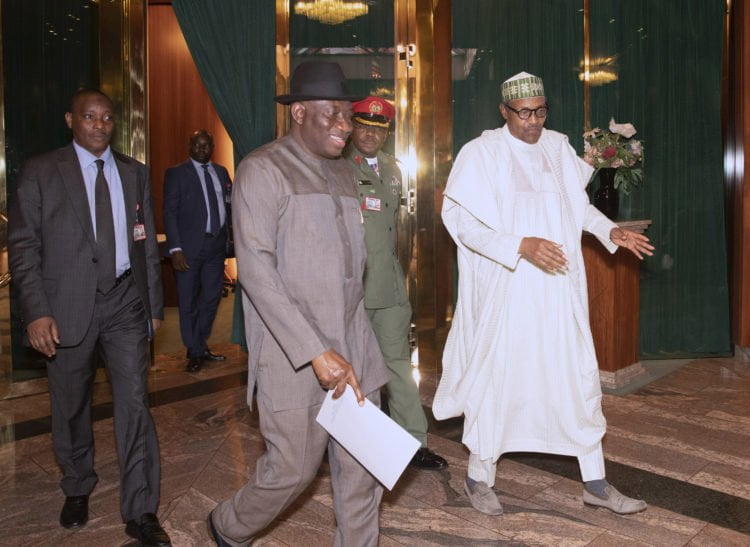 Former President Goodluck Jonathan has reacted to the barrage of accusations that he worked for the All Progressives Congress (APC) during the last Bayelsa governorship election.

In his reaction, Jonathan described the claims as totally untrue and an attempt to tarnish his image.

The ex-president’s response was contained in a press statement by his media aide, Ikechukwu Eze.

The statement also categorically responded to the claims by former Jigawa State Governor, Sule Lamido that Jonathan traded off the Bayelsa governorship election to the APC in order to get a soft landing with the Buhari-administration over the Malabu oil deal.

Naija News understands Lamido had in an interview claimed Jonathan traded off the election to avoid being prosecuted over the Malabu oil deal.

However, the statement from Jonathan’s media aide says: “Ordinarily, we shouldn’t be responding to an interview of this nature because it is obvious, given his amiable nature, former President Jonathan does not consider the idea of joining issues with individuals on the pages of newspapers a decent conduct.

“We are also aware of the former president’s belief that truth always has a way of catching up with statements rooted in lies and propaganda, such as this one. Furthermore, we considered that when former president Jonathan was in office, Lamido was one of the governors that worked closely with him.

“However, we chose to make this clarification just to set the record straight, especially as some of the former president’s close associates have been asking questions about the blatant statement credited to Lamido.

“We really do not know why Lamido, chose to speak like he did, especially with such hostility, contempt and lies against former president Jonathan.

“However, one thing is clear: In his anger and apparent bile-filled disposition, Lamido, an otherwise astute and erudite politician, obviously dropped the ball by electing not to speak responsibly like a statesman.

“He actually came off the interview sounding like a sulking skunk, to whom logic or reason meant nothing. It didn’t matter to him that, as a well-respected member of the society, he shouldn’t make such weighty claims against a former president if he was only guessing, like he admitted. Hear him: ‘And the issue of Malabu, I think, played a key role’.

“Apparently, seized by some inexplicable resentment, Lamido held on to the lie currently being pushed by few mischief-makers to the effect that former president Jonathan helped the APC to win the last governorship election in Bayelsa State.

“Unfortunately, the former governor jumped into this convenient bandwagon of grovellers without first thinking of the burden of substantiating his claim. What to do? Orchestrate a raft of incongruent drivel of cheap lies to confuse the readers.

“In one breathe, Lamido alleged Jonathan worked against his party ‘because he was very, very angry with (governor) Dickson,’ in another, he claimed it was ‘because he (Jonathan) knows his problem with Buhari and his government. And the issue of Malabu, I think, played a key role’.

“This absurd claim definitely would have gained more traction in the public space if it really made any sense. But it didn’t.

The statement called to attention the fact that Jonathan openly campaigned for the PDP in the 2015 governorship election in the state as well as the fact that the Malabu oil deal didn’t happen under the Jonathan administration.

“Where was Lamido and his ‘Malabu problem’ when Jonathan campaigned vigorously and helped PDP to win Bayelsa governorship election in 2015, under the same President Buhari?

“It is important to establish at this point that Lamido probably knows little about the Malabu case, for which he was not supposed to have commented blindly.

“In the first place, the Malabu oil block was not given out by Jonathan. It was a deal that was sealed during the time of the late head of state, General Sani Abacha.

“We feel that Lamido is in a position to know the business of oil exploration has an international dimension, as such, it is clear, it is not only the Nigerian government that is looking into the Malabu case.

“If that is the case, he should also have known that there are at least, three other countries outside Africa that are investigating the matter.

“Assuming without conceding that the former president Jonathan is culpable as Lamido alleged, would a trade off deal with the Nigerian government also free him from blame in other countries like Italy, United Kingdom and the United States?

“Jonathan is convinced that Lamido’s awkward intervention in this matter was deliberately designed as a form of blackmail. Having tried many other ways to discredit the former president to no avail, Lamido is now scheming to project Malabu as Jonathan’s Achilles heel.

“Here again, he has failed because the true story of Malabu is already known to Nigerians.

“Lamido, we believe, is too smart not to realise when the pot conveniently calls the kettle black, it is a grand design to confuse, deceive and cover up the truth.

“Lamido served as governor of Jigawa State for two terms on the platform of PDP after which the ruling APC took over his state. Is he then telling Nigerians that he cut a deal with APC, helped the ruling party to procure victory at the poll and take over his state?

Jonathan then advised that a proper investigation be done on why the PDP lost the 2019 Bayelsa governorship election and stop blaming the party’s loss on him.

“The fact is that it is not only in Bayelsa State that the country had experienced such a situation where PDP or even APC had lost elections to another party.

“Holding Jonathan responsible for PDP’s loss in Bayelsa without first investigating the issues that determined the fate suffered by the party in the state is not only disingenuous but also detrimental to the image and aspirations of the party.”