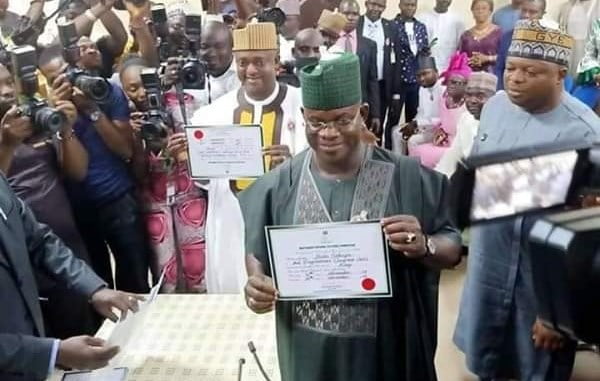 The governorship candidate of the All Progressives Congress in Kogi State, Yahaya Bello and his running mate, Edward Onoja, have been presented with Certificates of Return by the Independent National Electoral Commission on Thursday.

The electoral body presented the certificate of return to the Kogi State Governor at the Professor Mahmoud Yakubu Hall, at the state headquarters of the Independent National Electoral Commission, Lokoja, the state capital.

The APC candidate had scored 406,222 votes to defeat the candidate of the Peoples Democratic Party, Musa Wada, who polled 189,704 votes.

The Kogi state resident Electoral Commissioner, Professor James Apam said the presentation was in line with the tradition of the commission.

“We know what we went through to get to this stage and its time to settle down for the job ahead” he noted.