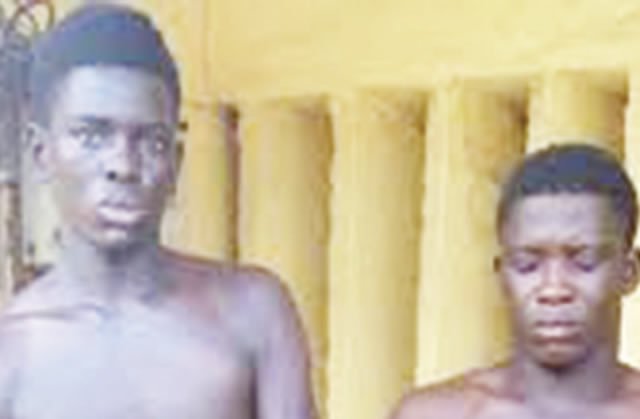 The Lagos State High Court in Igbosere on Monday ruled in the case which saw two siblings, Saheed and Ayodeji Obadimeji behead a 10-year-old boy identified as Joseph Makinde.

Mr Kayode Makinde, the father of the victim narrated how the duo killed his son and held on to his parts at the police station.

There had been a report that the duo allegedly beheaded Joseph in an uncompleted building at Sapati, Ibeju-Lekki, Lagos, over N200,000.

The 19 and 18-year-old siblings allegedly lured the victim into the uncompleted building by sending him to buy a beverage drink for them and when he brought it, they held him and cut off his head with a knife.

Saheed and Ayodeji alleged that they were contracted by one Sodiq Abefe to produce a human head for N200,000.

The duo was apprehended by the anti-kidnapping operatives of the Lagos State Police Command and was subsequently arraigned before Justice Adedaye Akintoye on two counts of conspiracy to commit murder and murder.

The offences, according to the prosecution, contravene Section 222 (1) (a) and are punishable under Section 233 of the Criminal Law of Lagos State, 2015.

The father of the deceased upon the resumption of the hearing told the court how he saw one of the defendants holding his son’s head, while the other was holding his torso at the police station.

Kayode, who is the first prosecution witness, stated that he knows the defendants and that they live in the same area of Sapati town with him, he added that the duo was from the same mother but different fathers.

The bereaved father, while being led in evidence by the prosecution counsel, Yusuf Sule, noted that one of his neighbours, identified simply as Femi, had sent Joseph on an errand on the next street to help him withdraw money from an Automated Teller Machine when he was accosted by the defendants.

The father of the victim told the court that his son left for the ATM around 6.30 pm and did not come back, and when a search party was constituted to look for him, he could not be found and a case of a missing person was reported at the Elemoro Police Station, Ibeju-Lekki.

He added, “The following day, I returned to the police station and the police took me to where a patrol van was parked and showed me the rear of the van, where I saw the dead body of my son. The first defendant was holding his head, while the second was holding the body.”

“The police arrested Femi, who sent my son on an errand to the ATM; they took the defendants to Panti and at Panti, I was asked what happened and I narrated what I knew to them and they told me they were working on it.”

Under cross-examination by the defence counsel, Emma Nidiyo, Kayode reiterated that he saw his son’s body parts with the defendants and that they confirmed at the police station that they killed Joseph, adding that his son was not a friend to the defendants before he was killed.

Justice Akintoye adjourned the matter till January 20, 2020, for the continuation of trial.