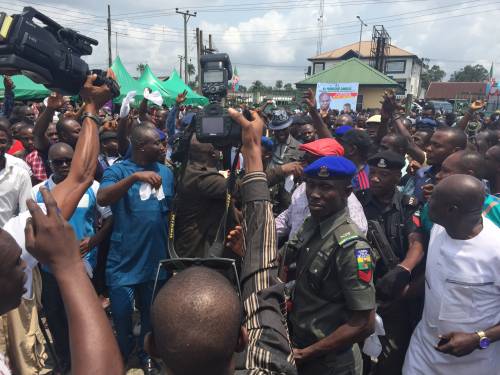 Security personnel have mounted checkpoints in major junctions in Yenagoa, the capital of Bayelsa, as the state votes to elect its governor, News Agency of Nigeria (NAN) reports.

Also heavily manned is the Tombia Roundabout, a location within the town that hosts major transport companies and motor parks.

NAN reports that although these junctions were barricaded, security agents on duty were not seen harassing road users.

Some residents who spoke to NAN said that the presence of security agents had rekindled hopes that voters would be safe to exercise their franchise.

One of them, Mr Henry Onari, a civil servant, commended the security personnel for their civility and peaceful conduct.

“I have not seen them harassing anybody, they are merely searching vehicles not marked for election duty, this is a good development,’’ Onari said.

Another resident,Mr Leader Ndutimi, described the security checks at the junctions as a step in the right direction.

“It is an election day, we don’t expect free movement, thoroughness is expected of the security agencies, and that is what we are seeing,’’ Ndutimi said.

Miss Nengi Tomprenbofa, a nurse, said the screening of vehicles and other road users by security agents was commendable.

“These checkpoints are in order, you can see that people are already beginning to regain confidence, I am happy with the situation,’’ Tomprenbofa said.