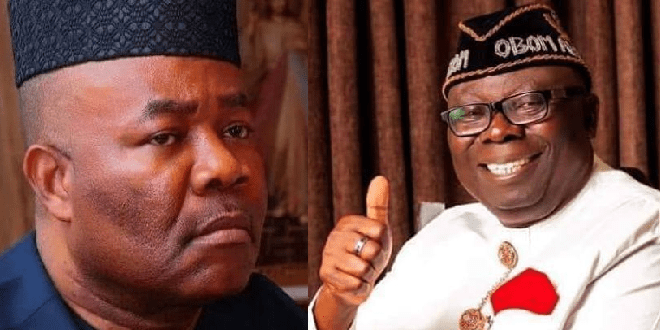 Senator Chris Ekpenyong has reacted to his defeat at the Court of Appeal by the Minister of Niger Delta Affairs, Senator Godwill Akpabio.

Naija News reports that the Court of Appeal sitting in Calabar had nullified the election of Dr Chris Ekpenyong, of the Peoples Democratic Party (PDP) and ruled in favour of Sen. Godswill Akpabio, a former Senate Minority leader.

The minister had approached the Appellate Court asking it to upturn the pronouncement of the Independent National Electoral Commission (INEC).

Delivering judgement on Saturday, the Appeal Court ordered INEC to withdraw the Certificate of Return issued to Dr Ekpenyong and conduct a fresh election in the Akwa Ibom North-West Senatorial District within 90 days.

Reacting in a statement, Ekpenyong said his mandate remained intact despite the ruling by the Appeal Court.

The lawmaker accused the Appeal Court of granting a prayer that was not sought by Akpabio.

Ekpenyong said: “I just finished interacting with the senate president and we have an assignment on Tuesday, I remain the representative of my people in the senate and nothing has changed.

“Look all through his petition, Akpabio never sought for cancellation of election in the reliefs he sought, he was urging to be declared the winner in lieu of a purported 61000 votes he claimed for himself. I feel it is not right for a relief he didn’t seek to be awarded to him. But since it is the final arbiter in national assembly matters, there is no way we can appeal the ruling.

“I am very prepared to defeat him again in Essien Udim, let’s go to the field, he has to resign first as a Minister(of Niger Delta) in line with the provisions of the constitution.”