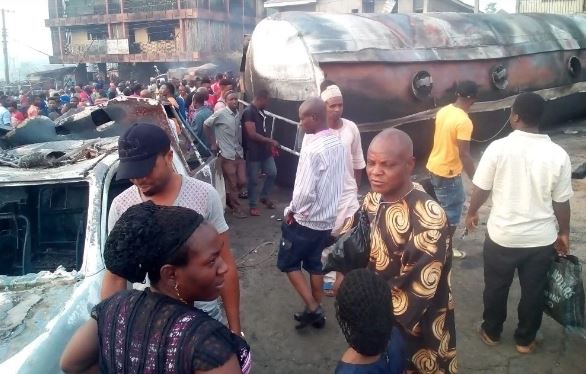 A long tanker conveying petrol to one of the filling stations on Saturday fell into a gutter causing tension in Akwa, Anambra State.

Naija News reports that men of the State fire service have arrived the scene of the incident.

It was gathered that the tanker fell around 7.am opposite Saint Patrick’s Catholic Church along Zik avenue Awka.

Policemen and other security personnel had cordoned off the arena to avoid the repeat of the Onitsha inferno.

Recall that a tanker laden with fuel had fallen and caused a fire outbreak in Upper Iweka Road and Ochanja market, Onitsha which saw the loss of many lives and destruction of properties worth millions of Naira.

While well-meaning Nigerians expressed sadness over the Ochanja tanker explosion, President Muhammadu Buhari sympathized with the families of victims that lost their lives in the inferno.

In his words; “I am profoundly touched by the sight of the charred remains of an innocent mother and her child who are victims of this tragedy,”

Similarly, host of the Big Brother Naija (BBNaija), Ebuka Obi-Uchendu in his reaction to the tanker explosion, took to his twitter handle where he noted that “we are on our own in this country.”