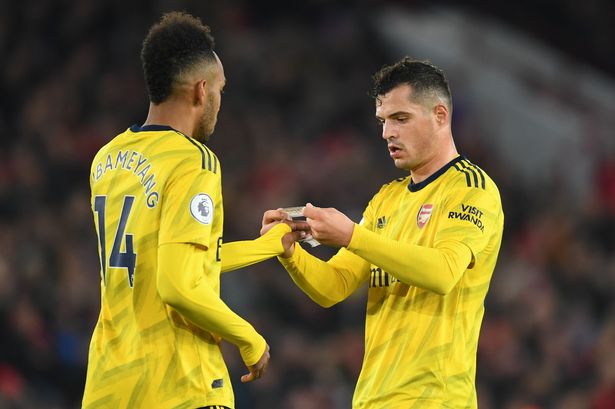 Struggling English Premier League side Arsenal on Tuesday announced that it has stripped midfielder Granit Xhaka as captain of the club.

Xhaka threw his arms up in the air and cupped his ears after his substitution was greeted by boos during their 2-2 draw with Crystal Palace.

Speaking on Tuesday ahead of the Gunners Europa League match against Vitoria SC, Unai Emery revealed that Xhaka was no longer part of the Gunners’ leadership group adding that Xhaka “accepted” the decision.

“I have spoken to Granit and he is no longer one of the captains in the group,” Emery said.

Asked if Xhaka will ever play for Arsenal again, the Gunners’ boss didn’t give a clear answer.

“The future is Arsenal’s future. We have a very important match on Saturday,” he said.

“We need to take some decisions… My focus is for tomorrow.

“He is our player, we want to respect him.”

Emery also confirmed that Pierre-Emerick Aubameyang has taken over as club captain.