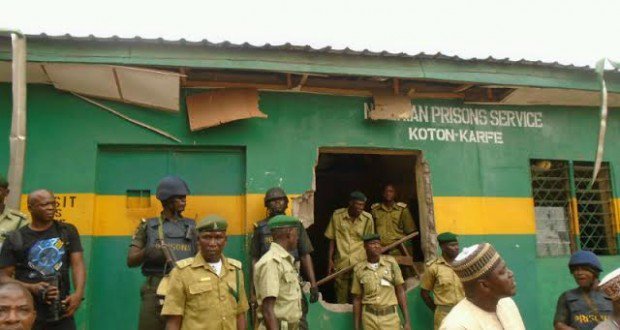 No fewer than 228 inmates have escaped from a medium federal correctional centre in Koton Karfe in Kogi State, north-central Nigeria after some parts of it collapsed owing to heavy flooding.

A report monitored on the News Agency of Nigeria (NAN) by Naija News, says quoted the comptroller-general of the Nigeria Correctional Service (NCS), Jafar Ahmed, as saying this while speaking with journalists in Koton Karfe on Monday, October 28.

Ahmed said the walls of two cells and a perimeter fencing came down after a flood hit the facility at about 3:00 am.

The comptroller-general of the Nigeria Correctional Service said the centre is no longer habitable because of the incident.

Ahmed said some re-arrested inmates have been transferred to other facilities in the state.

The NCS comptroller-general said details of the incident will be made public soon.

Speaking on the development, the security adviser of Yahaya Bello, governor of Kogi, Jerry Omadara, said they were informed of the development about 4:00 am.

The security adviser said Bello directed the head of security agencies in the state to deploy their operatives to the scene.

Omadara said security agents were still combing the bush in an effort to re-arrest some of the fleeing inmates, adding that the flood was not making it easy for them to escape.

The security adviser while commending the security agencies for their prompt intervention said nobody died in the incident.