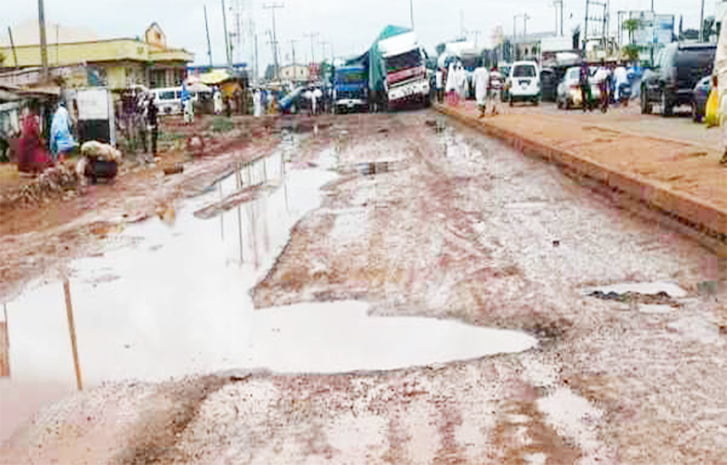 The wheel of any country economy keeps rolling or moving without experiencing a developmental hiccup is as a result of the conscientious mechanical workshop, well equipped enough with industrious and veracious artisans that steadily oil and grease the metallic conjoint of the nation commercials with sterling infrastructural road or the rehabilitation of the degraded thoroughfare. Working assiduously and persistently servicing the economy with good motorable roads.

Planning is essential to all facets of our lives. However, the schedule that most Nigerians develop concerning road transport vividly revealed that Nigeria government failed the litmus paper test of functional governance. Having a travelling plan is not an erroneous act, but the reason why many Nigerians have a catalogue for a trip apparently shows our supremacy in dysfunctionality.  Catching up with an appointment at a pleasing time; avoidance of men under-world who seize the opportunity of the deteriorated roads and convert it into a toll gate of forcefully collecting Nigerians belongings; traffic aversion that emanates from the swampy-muddy roads decorated with tectonic humongous potholes.

Yet, the alarming dilapidation of the roads is not among the major issues debated in the National Assembly but rather the talk of non-beneficial acquirement of luxurious cars for billions of naira is the emergent issue that requires urgent attention from them. A propose backward horse riding into the ancient days of tollgate fees collection and an upward review of the VAT system to 7.5% by the federal ministry of finance to adjust the shrinking revenue capacity of the federal government is nothing worthy of implementation but a misplacement of priority and an avenue to catapult Nigerians into the penurious pond of wretchedness.

The 2020 appropriation bill luminously brighten up the nation’s darkroom of revenue epilepsy of not having VAT revision problem or tollgate revamping challenge as a way forward for expanding the federal government’s revenue wings in maintaining the federal or state government roads but rather the prodigious problem of reducing the cost of governance.

It still appears as a nightmare which gives me a sleepless night or a horrific long night period that obstruct the arrival of new daybreak. Why will the National Assembly take a colossal amount of 125billion naira and a 9billion naira appropriation for the purchase, maintenance, and fueling of generators despite the colossal money pump into the power sector by the previous and present administrations? Are we not bamboozled by a leaping anti-corruption government about a purported increased in mega-watts generation?

It is expedient we take the progressive route of Italy as the country parliament voted to cut down the number of legislators in both houses. While the Senate will now have 200 lawmakers from the former 315, the chamber of deputies will have 400 as against the erstwhile 630. This new propitious development should be fabricated in Nigeria’s political environment instead of sun-drying Nigerians of economy corpulent. Thus, the excess money will be available for construction, maintenance, and rehabilitation of roads and provision of other necessary basic infrastructural amenities for the masses.

Sharing my despicable experience on this exacerbated status of our roads that connect the red iron sheet proliferated city to the commercial epicentre of the country and that of gateway state to the centre of excellence province for the purpose of placing my testimonial seal of attestation on the deplorable state of Nigeria roads. The worsening inter-state link roads are Abeokuta-Lagos road through Sango-Ota; Sagamu-Ikorodu-Lagos road though Ogijo; Ibadan-Ijebu-Ode-Ikorodu-Lagos road; Oyo-Ogbomosho road where accidents have become normal daily routine register that must be marked and even the very busy Lagos-Ibadan expressway whose contract has been awarded since 2009 but yet to be completed.

It was on the 3rd of October 2019, a fateful Thursday morning when I headed to Abeokuta from Lagos taking the Ogijo route due to my proximity to Ikorodu. Leaving around 7:45 am to catch up with NYSC certificates distribution. We spent hours on the road resulting from the immovable traffic caused by the degraded road with king-size potholes filled up with water. We got to the point that everybody needs to evacuate the car and pass through the muddy area for the vehicle easy passage of the ponds. A declension state of the road that makes it impossible for the commuters to figure out whether the road has been tarred in the past.

In the same dejected register of my crestfallen experience is the Ibadan-Ijebu Ode-Ikorodu road where mud has taken over the road, potholes become bumps that reduced the acceleration of travellers, a saddening situation that attracts the venture of men in black to open-up a more than ten different business centres where they extort commercial drivers. The catastrophe nature of the road gave the commercial drivers an unchallengeable monopoly license to determine the hiking transportation fee. The most sardonic experience was the Sango Ota-Abeokuta road when I left Lagos some minutes past 5:00 in the evening, and I entered Abeokuta around, 2:00 am in the mid-night. The Lafarge cement junction traffic can only be ameliorated by the erection of a flyover bridge at the junction to mitigate the massive gridlock. Journey across Nigeria becomes so strenuous that a pain reliever drug is an inevitable messiah.

From the 30th of September 2019 report of punch editorial, which enunciated the World Bank description of roads as “arteries through which the economy pulses.” When the arteries are on the verge of weariness, it could lead to an economy inferno if an extinguisher service is not sought. The similitude of the importance of roads is like that of sunshine that plants harness in manufacturing their food. Roads are the path through which developmental goals can be achieved. Investing heavily in the construction of good roads and rehabilitation of existing but degraded ones will save producers from the enormous miscellaneous transportation cost, reduced road accidents, which will thus reduce the lives and property lost on our highways to the minimum. Also, it will put the nation slightly back on the track to achieving sustainable development goals objectives.

Dauda Taoheed writes in from Lagos via [email protected]