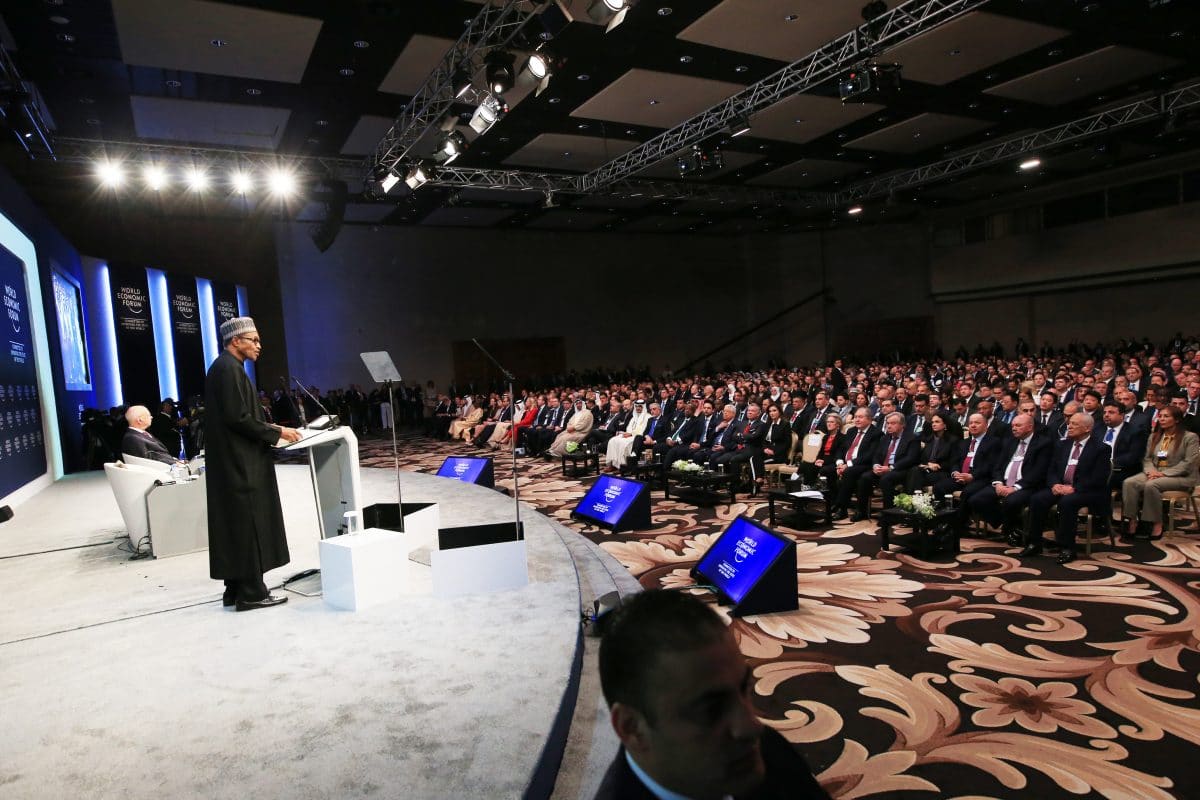 The Nigerian President stated this while speaking at the first plenary of the Russia-Africa Summit.

The Russia-Africa Summit is co-chaired by President Vladimir Putin of Russia and African Union Chairman and President of the Arab Republic of Egypt, Abdel Fattah El-Sisi.

See the full text of Buhari’s speech below:

I am delighted to participate in this first and historic Russia-Africa Summit. I thank our chief host, His Excellency Vladimir Putin, President of the Russia Federation for this important initiative and for the warm and generous hospitality accorded to us also commend His Excellency, President Abdel Fattah El-Sisi of the Arab Republic of Egypt, for his visionary and collaborative leadership of the African Union.

Today, we live in a world where collective peace and prosperity can only be achieved through collaboration and mutual respect.

This reality was aptly captured by the Late Dr. Martin Luther King, Junior when he said and I quote:“We are caught in an inescapable network of mutuality, tied in a single garment of destiny. Whatever affects one directly, affects all indirectly.”

Nigeria’s relations with Russia just like the rest of Africa began during the Soviet era when diplomatic relations were first established in 1960.

More recently, our partnership has extended to the oil and gas sector as well as military and technical assistance in support of our fight against the Boko Haram insurgency.

At this point, I would once again like to thank His Excellency, President Putin for his support especially in the area of security.

It is my hope that through this forum, Russia and Africa will revitalize their time-tested relationship by exploring new opportunities for the collective benefit of our peoples.

Since the collapse of the USSR in 1991, relations between Russia and African nations have lagged behind historical levels.

Africa will continue to remember this, and many other significant gestures of solidarity and support that shaped our history as a continent.

We are eternally grateful to the Soviet Union for coming to the aid of Africa in its hour of need.

As we live in an increasingly changing world driven by trade, technology, and innovation, the time has come to inject new energy and pragmatism in Africa-Russia relations for the mutual benefit of both Africa and Russia.

I want to emphasize that this mutually beneficial relationship must go beyond trade and business. Our re-energised partnership must also address challenges such as counter-terrorism, poverty eradication, human and drug trafficking, illicit financial flows, climate change and migration to mention some of the many contemporary challenges facing our peoples.

Our continent is rich in human and natural but is lagging behind in capital and technology.

This is why we see increased conflict, migration and instability that is also impacting many nations outside Africa.

On our part, we in Africa have continued to view Regional Integration as a key development priority. Our integration is one that seeks to address our infrastructure deficit, conflicts and terrorism, climate change, human trafficking and of vitality, trade.

Our integration process also takes into account our diversity as a continent and our unique challenges at the national and sub-national levels.

This is why progress has been slow but steady.With a population of over 1.2 billion people, for us in Africa, getting our socio-economic integration right presents enormous opportunities as we stand to promote robust, equitable and inclusive growth that will minimize conflict and enhance economic development.Today, these aspirations are captured in the Agenda 2063 of the African Union.

We are confident that with strong partners like Russia, our goal of having a peaceful and prosperous continent is achievableNigeria is the largest economy and most populous country in Africa.

Today, our population is almost over 200 million people. It is expected to grow to approximately 400 million by 2050. This will make Nigeria the third most populous nation in the world behind China and India.

Our economy is heavily dependent on its foreign exchange on oil. With the result that our high Gross Domestic Product (GDP) is not as a result of domestic sector productivity.

In the circumstances, although we still remain an oil-dependent nation, our government in the last four years has focused on diversifying our economy by supporting key job-creating sectors such as agriculture, mining, and ICT.

To achieve this, we invested aggressively in infrastructure development and introduced policies and programs that enhance our ease of doing business, reduce corruption in the public sector and enforce the rule of law.It is this inclusive economic diversification agenda that we want to forge a new Nigeria-Russia cooperation.

Already, we are seeing progress in areas of power generation, solid minerals development and rail transportation and I hope this will be expanded to Agriculture, Manufacturing and other means of Transportation.

We already have over 200 Nigerian university students in Russia benefitting from Russian Government scholarships which have been on-going since 1960.

Earlier this year, Nigeria signed a Bilateral Education Agreement (BEA) with Russia which will expand the human capital development support we are already receiving.

Let me clearly state that the time has come with this historic summit today, for Africa and the Russian Federation to develop new mutually beneficial relations.

On our part, I want to assure our Russian friends that Africa is resolute and ready.We look forward to embracing the new dawn of Africa-Russia partnership in general, and the revitalized Nigeria-Russia relations in particular.