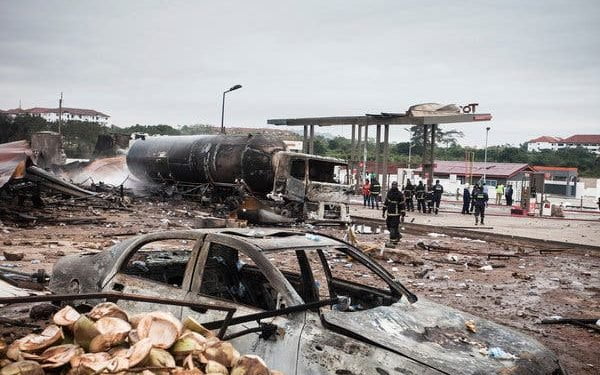 Three persons have been killed while several others have sustained various degrees of injuries after a truck lost control and rammed into a petrol station located around the Urua Ekpa Junction in Itu Local Government Area of Akwa Ibom State.

Naija News reports that the accident that occurred on Wednesday at about 6.45am.

Those who died in the accident include two women.

Eyewitnesses revealed that the accident occurred after a Mack Truck with a Rivers State registration number, “BNY 137 XA” skidded off the road.

The truck is said to have rammed into SG filling Station, destroying three Keke vehicles beyond repairs.

It was gathered that the truck killed three persons instantly while three others sustained serious injuries and have been taken to an undisclosed hospital for treatment.

While confirming this report, the Federal Road Safety Corps (FRSC) has placed the causality figure at two, including a man and woman while two were injured.

“I was just standing directly opposite the SG filling station when the truck came from Itam market probably on it way to Calabar. There was a Keke driver trying to cross the road so while trying to avoid the Keke, the truck diverted and ran into the filling station.

“The three people who were standing there and three Keke vehicles were damaged beyond repair” the source said.