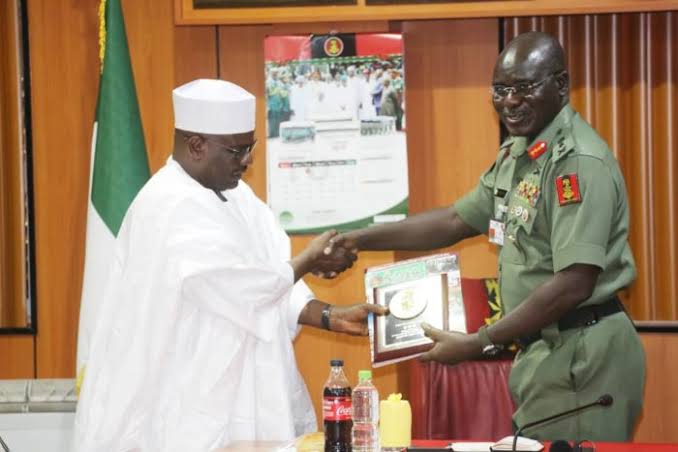 The National Assembly Joint Committee on Army headed by Senator Ali Ndume (APC-Borno South) on Tuesday met with the Chief of Army Staff (CoAS), Tukur Buratai and top officers of the Nigerian Army.

Naija News reports that the meeting was held at the Defence Headquarters, Abuja.

Recall that President Muhammadu Buhari had allocated N100 billion for the Armed Forces in the 2020 budget.

Speaking before the meeting started, leader of the delegation and Chairman Senate Committee on Army, Senator Ali Ndume disclosed that they visited the defence headquarter to perform their oversight functions.

He said: “The Committee embarked on a fact finding mission and NEEDS assessment across military units and formations to know what is going on.

“After our tour, we decided to come to the center so that we can talk especially now that the budget of the Nigerian Army is out for consideration, so this not a visit that you will discuss the details to the press”.

He noted that Nigeria is fighting a war and sufficient funds should be made available for the Armed Forces.

“It is interesting to know that on the floor of the Senate there is already a Motion on ground stating to see how we can fund the Armed Forces even outside the normal budget because we realized that budget alone is not likely to take us there,” Hon. Namdas said.