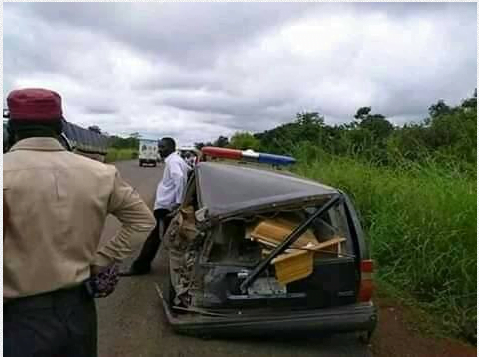 In less than 24-hours after the Onitsha tanker explosion that left many dead, with properties worth millions of Naira destroyed, another tanker on Wednesday, October 16, lost control and rammed into a bus conveying a corpse for burial.

Naija News understands that the tragedy struck in Benue community.

The petrol tanker is alleged to be the property of the Nigerian National Petroleum Corporation (NNPC).

The incident was reported to have occurred along the Taraku Otipo way in Benue.

A social media user, identified by her username as Jennifer Obasi shared photos taken from the scene of the incident.

Obasi in her report captioned the photos as thus; “Double wahala for dead body….

The incident created panic in the state while the officials of the Federal Road Safety Commission (FRSC) arrived the scene to maintain normalcy.