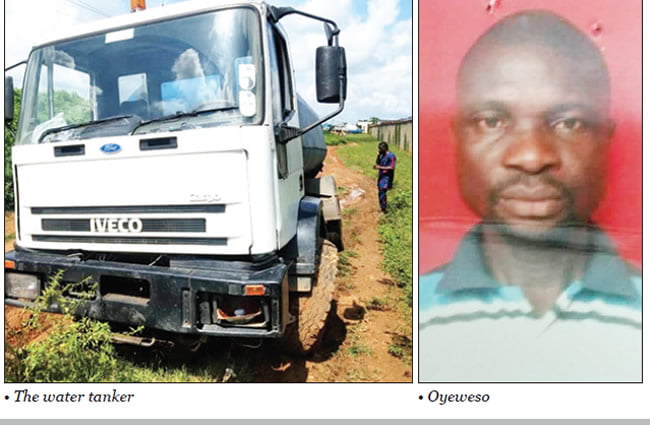 A man identified as Taofeek Oyeweso, is on the Oyo State Police Command radar, after he allegedly crashed an engineer, Afees Tijani, while on the way to deliver water to a company in the state.

According to report, the engineer was riding his power bike to Ibadan when the Water tanker driver who was driving against the traffic, rammed him less than a kilometre to the Sat Guru Maharajji camp end of the Lagos-Ibadan Expressway.

Eyewitnesses noted that Oyeweso who did not wait after the accident tried escaping with the tanker, with number plate BDJ 01 YC, ran into a ditch and got stuck.

Tijani’s friend, Jeremiah Osho, who witnessed the accident, said Oyeweso abandoned the tanker and ran away, he further stated that the Engineer who was unconscious was rushed to the Intensive Care Unit of the University College Hospital, Ibadan, where he was placed on life support machine.

Osho stated, “I was driving from Abeokuta to Ibadan but met Tijani at Saapade, he was riding his power bike to Ibadan when I saw him. So, we stopped at the bridge and greeted, and later embarked on our journeys. After about 15 minutes’ drive, I saw that the vehicle moving ahead of us suddenly swerved to the left when Tijani wanted to overtake it, so he swerved to the right, but in the process, one of the three water tankers driving against the traffic ran into him.”

“I quickly reversed and got out of my car to rescue my friend but he was almost dead when I found him by the roadside. His left leg was shattered and he was having seizures, so, I removed his helmet and shirt and started fanning to sustain him. I called the Sector Commander, FRSC, and she sent a rescue team; a passer-by also helped in informing the police officers at the Ibadan tollgate.”

“We traced the water tanker that hit him to a company it went to deliver water to, but when we got there, we were told that Oyeweso drove out immediately he delivered the water. We followed the direction he took and found the truck stuck in a ditch, but the driver was nowhere to be found.”

Tijani’s elder brother, Ishaq, said doctors had been battling to save the life of the father of three, adding that his left leg had been amputated.

Ishaq stated, “I was on my way to Lagos when I received a call that my brother was involved in an accident. The person, who informed me, said he had died. So, I alighted from the bus and went to meet the Federal Road Safety Corps officials to take me to the location, but I was told that my brother had been moved to the Intensive Care Unit of the UCH, Ibadan.”

“When I got to the hospital, I saw my brother on life support machine and to make matters worse, his left leg had been cut off. We have been staying with him at the hospital since then. His company has sent representatives to check on him and the police, during the investigation, came with the owner of the tanker to the hospital.”

The Managing Director of Mc Morphills Investment Limited, the company that employed Oyeweso, Babalola Aladenika, while commiserating with the victim and his family, blamed Oyeweso for driving against the traffic, adding that the firm had been working with the state police command to ensure the arrest of the fleeing driver.

Aladenika said, “The driver was at fault for driving against the traffic to face incoming vehicles from Lagos. From what I was told, there was no traffic on the normal lane when he took the decision that led to the accident. I have been to the UCH to check on the motorcyclist and I saw that his leg had been amputated. Oyeweso is at large and we have been making frantic efforts to locate him, because he disappeared after the accident.”

“He is not at his known address in Ibadan; we also went to his second address at Meiran in Lagos, but he was nowhere to be found. All his three numbers are switched off; I have reported to the police to declare him wanted, because the victim’s family is insisting on seeing him and has been insinuating that we don’t want to release him since we cannot provide him. But it is not true; we are willing to assist the family to get justice.”

When contacted, the Oyo State Police Public Relations Officer, Gbenga Fadeyi, said a manhunt had been launched for Oyeweso.

Fadeyi stated, “Concerted efforts are being made to arrest the driver, who has gone into hiding. But the owner of the tanker is working with the police to make sure that the driver is arrested.”

“He drove against the traffic and the victim was knocked down; the police have been going to the UCH to check on the victim, whose leg was amputated due to the injury he sustained. We are still looking for Oyeweso and we will soon get him.”