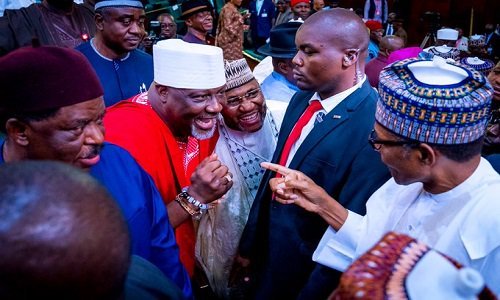 President Muhammadu Buhari was shocked last week to discover that Dino Melaye, a senator representing Kogi West at the Nigerian Senate, is still at the upper legislative chamber of the National Assembly.

Moments after the President presented the budget, a picture of Senator Melaye hailing him with a salutary fist, emerged on the internet.

Since the emergence of the picture, which later went viral, speculations has been on as to what the President was telling the Kogi West lawmaker.

Some political analysts suggested that President Buhari was issuing a threat to the controversial senator due to his stance on the President’s government and the ruling party.

Naija News understands that the suggestion was linked to the fact that Senator Melaye dumped ruling All Progressives Congress (APC) for the opposition Peoples Democratic Party (PDP) prior to the 2019 general elections in Nigeria.

While many believe the President issued a threat to the Kogi West lawmaker, a report monitored on The Nation newspaper by Naija News, says otherwise.

The report quoted a source who was at the scene of the interaction, to have said that what President Buhari said to Senator Melaye was nothing of a threat but a question that is “pregnant with meanings”.

According to the source, President Buhari simply asked Senator Melaye: “You mean you are still in this chamber?”

Meanwhile, Naija News understands that the President’s question may be due to the observation that Senator Melaye has been unusually quiet in the 9th Nigerian Senate, unlike the 8th Senate led by Bukola Saraki, where he was very vocal.