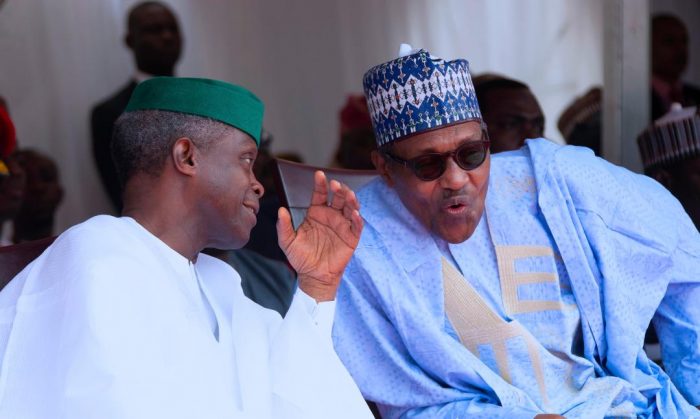 Naija News understands the party made this known in a statement by the APC publicity secretary, Mallam Lanre Issa-Onilu.

The statement debunked all the speculations and conspiracy theories as ‘hogwash’ and ‘overdrive’.

Issa-Onilu admitted that the crisis only exists in the sponsors’ fatuous imagination.

The statement by the APC on the reported rift between the President and his Vice reads as thus; Recently, the media has been awash with an absurd conspiracy of an imagined rift in the presidency, which according to conspirators led to the alleged ‘whittling down’ of Vice President Yemi Osinbajo’s roles in the administration. This happens to be one of the many fake news flying around in recent days.

First, the conspirators went on overdrive following the setting up of the Economic Advisory Council (EAC) comprising some of Nigeria’s most independent-minded economists (some vocally critical of government’s fiscal policies) to advise the President on economic policy matters, including fiscal analysis, economic growth and a range of internal and global economic issues, working with the relevant cabinet members and heads of monetary and fiscal agencies.

Then, sponsored hogwash reports emanated that the Federal Inland Revenue Service (FIRS) gave the Vice President N90billion for the 2019 election — a rejected and disgraceful template of the Peoples Democratic Party (PDP), which saw the party deploy public and counter insurgency funds to finance their political activities during their failed 16-year rule of the country.

Addressing Nigerians on the occasion of the country’s 59th independence anniversary, President Muhammadu Buhari announced plans to upgrade the National Social Investment Programmes (N-SIPs) to a full fledge ministry status with the take-off of the Ministry of Humanitarian Affairs, Disaster Management and Social Development.

The conspirators are desperately trying to link government decisions on the N-SIPs, which have been under the office of the Vice President since it started in 2016 to support the conspiracies, however mundane.

In the same October 1 address, the President announced the recent redeployment of the Niger Delta Development Commission (NDDC) to the Ministry of Niger Delta Affairs from the Office of the Secretary to the Government of the Federation (OSGF). Was this also to ‘whittle down’ the powers of the OSGF?

In our respective and collective efforts to support the development of our country, we cannot afford to fall into the superficial in assessing actions of government.

Institutionalising the N-SIP for greater impact

Since implementation of the N-SIPs in 2016, the programme has impacted over 12 million direct beneficiaries and over 30 million indirect beneficiaries. The SIPs are already gaining global and local acclaims across the globe on account of its nationwide social impact, particularly from endorsement by the Africa Development Bank (AfDB), World Bank, World Economic Forum, Action Aid (Nigeria), Africa Network for Environment and Economic Justice (ANEEJ) the Nigerian Economic Summit Group (NESG) among others.

A question we should ask the conspirators and their partisan sponsors is how did they miss the import of the President’s decision to create a whole ministry to superintend the social investment programmes and humanitarian issues?

How did they not realise that the President’s action is an indication of the importance he attaches to policies that are targeted at the poor?

Why does it appear that the so called analysts always do not see things from the point of view of the poor? When policies are targeted at the elites, analysts always seem to see those and understand them for what they are, but choose all the time to see the mundane when policies address issues that bother on the welfare of the masses.

Warehousing all Social Investment Programmes, such as N-Power, Conditional Cash Transfers, National Home-Grown School Feeding and Government Enterprise and Empowerment Programmes (GEEP) under a full Ministry and appointing a substantive Minister with the full complement of civil service structure is a statement of President Buhari’s renewed commitment to pulling millions of Nigerians out of poverty.

We can understand PDP’s incurable shortsightedness and its leaders’ disdain for the good of the ordinary Nigerians, but we urge a more rigorous and educated critic of government actions from those who have taken on the noble responsibility of reviewing public policies. This is a duty Nigerians expect of the media and the critics.

The Vice President played a frontline role in the conceptualisation of these policies and programmes and the President, in demonstration of his trust for him, charged him with the responsibility of nurturing the programmes to the current stage. Tremendous successes have been recorded under the guardianship of the Vice President. In demonstrating the administration’s commitment to the cause of the poor, these interventionist programmes have been elevated to the Next Level with the creation of the new ministry.

The purveyors of the conspiracy theory about the imagined rift in the Presidency have missed the opportunity to see the commendable efforts of this government. Perhaps, if these policies were about the elites, they would have focussed on the positive imports rather than fishing for a crisis that only exists in their fatuous imagination.