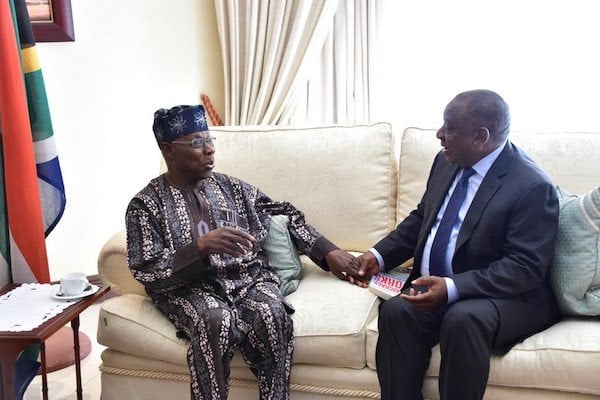 Naija News that the visit came after Obasanjo’s recent letter to Chief Mangosuthu Buthelezi, South African politician and Zulu tribal leader about the demerits of xenophobia.

This online news platform the former Nigerian leader used the visit to present to Ramaphosa a new book that he co-authored with Greg Mills of the Brenthurst Foundation in South Africa; Jeffrey Herbst, a celebrated Africanist; and Tendai Biti, the former finance minister of Zimbabwe.

After the meeting, the South African President thanked Obasanjo for working hard and still having the energy to write and contribute to current debates about the development of Africa.

President Ramaphosa and the former Nigerian President used the opportunity to reflect on recent events in South Africa which saw more than four hundred Nigerians voluntarily evacuated from the country.

“Former president Obasanjo expressed his sincere appreciation of President Ramaphosa’s recent appointment of a team of special envoys who have in the past few days visited a number of fellow African states to deliver a message from the president regarding the incidents of violence,” said Ramaphosa’s spokesperson, Khusela Diko.