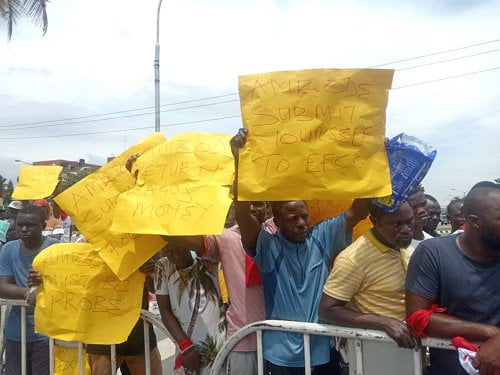 Protesters have on Tuesday, in their large numbers stormed the Lagos State House of Assembly in a protest demanding the probe of former governor Akinwunmi Ambode.

Naija News understands that the protesters under the aegis of Lagos Youth Vanguard (LYV) marched towards the Lagos State Assembly, armed with placards of various inscriptions and chanting solidarity songs.

The group of protesters was led by the Patron of LYV, Mr. Rasak Olokooba and the President of the Group, Mr. Ibrahim Ekundina.

Some of the placards of the protesters read: “Ambode, submit yourself for probe,” “Ambode must be probed,” “EFCC do your job,” “Ambode is a thief,” “Ambode awarded fake contracts,” and “Ambode, return Lagos money,” The Nation reports.

The Lagos Youth Vanguard stated in their leaflets that were distributed to journalists that Ambode; “deliberately laid landmine through the obvious improper, inappropriate and insufficient content in his handover note that should serve as a guide to the incoming administration in the tradition of every civilised public officer.”

The former Governor was accused of wrong priority in policies and programmes and abandoning the track that can bring about development in the state.

“We call for his probe and investigation with a view to apportioning penalty and dishing out appropriate penalties.