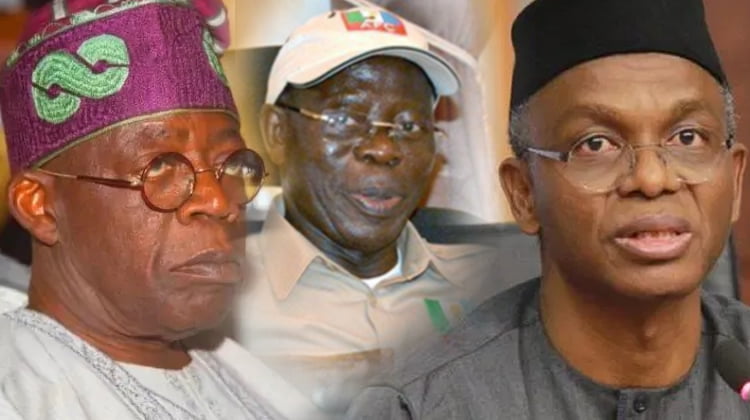 There had been speculations at different corners on who will emerge as the successor of President Muhammadu Buhari in the 2023 presidential election. The social media platforms have been filled with debates over the emergence of political posters spotted in strategic parts of the country.

Some of the posters that had been seen in parts of Nigeria include the National leader of the All Progressives Congress, Bola Tinubu, the Kaduna State Governor, Nasir el-Rufai and the National Chairman of APC, Adams Oshiomhole.

In Kaduna city, posters which read, ‘El- Rufai 2023 (Mai Aiki) for President, Federal Republic of Nigeria’, sponsored by the Northern Youth Forum were seen in various parts of the state on Sunday.

In Ikeja, a large billboard of Tinubu could be seen around the ‘Ikeja Along’ bus-stop, with the words, ‘BAT 2023’, although it has since been taken down.

In some part of FCT, posters of Oshiomhole, and el-Rufai as his running mate can be seen pasted shops.

On the poster with the heading, ‘Mandate 2023’, there are speculations that the advertisement was sponsored by the Miyetti Allah Cattle Breeders Association of Nigeria.

Although none of the politicians had declared their intention to run, there are believes that they are ready to use their power as a tool towards their agenda.

The National Secretary of Arewa Consultative Forum, Anthony Sani, described the posters as harmful to Nigeria’s democracy, saying the current administration was too young for politicking to begin towards the next one.

Sani said, “(It is) too early because the performance of the current regime must count for the politics of 2023.”

“What is more, the politics of 2023 at this point in time is capable of distracting the present government away from being focused on the task of delivering on the promise of its mandate.”

The National Publicity Secretary of Afenifere, Yinka Odumakin, also decried the emergence of the campaign materials towards the 2023 presidential elections.

Odumakin said, though the politicians were entitled to the campaign, they should contribute their efforts towards the “change” they promised Nigerians, which, according to him, Nigerians have yet to see.