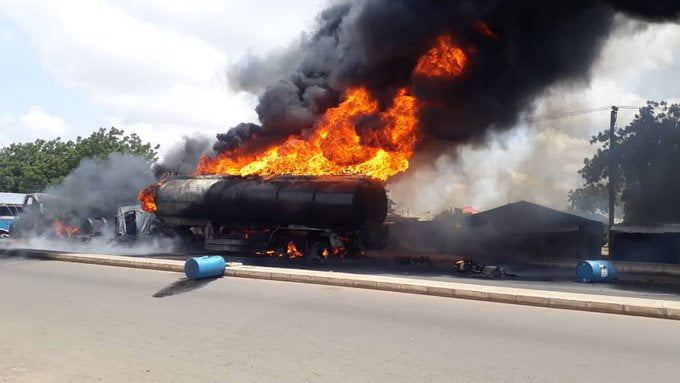 Five passengers have been reported to have died while at least 10 others suffered varying degrees of burns after a bus conveying them burst into a flames.

Naija News understands that the commercial bus somersaulted at the Onigari corridor of the Lagos-Ibadan expressway before flaming up, on the busy expressway.

The commercial bus was reported to be heading towards Lagos state from Sokoto state, but stopped over briefly in Ibadan to pick Lagos bound passengers.

The incident was reported to have occurred briefly after taken off from Ibadan. The driver was said to have lost control of his vehicle and smashed into the road covert; an action that made the vehicle tumbled repeeatedly before fire erupted from the crash.

The Route Commander and Public Education Officer of Federal Road Safety Corps, Ogun State Command, quoted the Sector Commander, Clement Oladele, as saying; “The lone crash involved a commercial bus that travelled all the way from Sokoto State but stopped briefly in Ibadan to pick other passengers. The bus was heading towards Lagos State before it lost control, at Onigari due to excessive speed, and collided with the road median with the bus upturning and bursting into flames.

“The FRSC Ogun State Sector Commander , Clement Oladele commiserates with the families of the crash victims and advised members of the public whose relatives travelled, requiring more information about the crash, should contact the FRSC Command at KM27 Ibadan – Lagos Expressway at Ogunmakin or the Olabisi Onabanjo University Teaching Hospital (OOUTH) , Sagamu, where the injured victims were rescued to.”

According to the Route Commander, the remains of those killed in the crash were also deposited at the OOUTH mortuary.

She urged motorists to drive cautiously on the Lagos – Ibadan Expressway as it is still undergoing rehabilitation. The FRSC Public Education Officer also recommended a limit of 50km per hour as safe speed at the construction area while passengers should always caution their drivers observed driving recklessly.