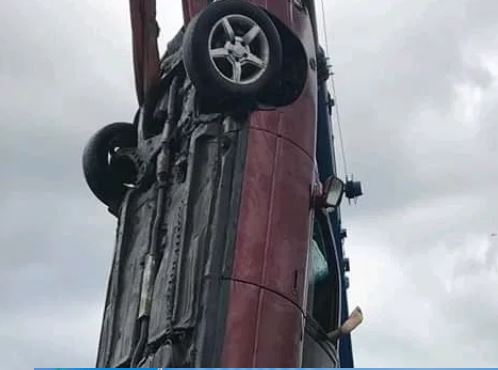 A yet-to-be-identified woman has died after her Camry car plunged into a river off Nigerian Liquefied Natural Gas (NLNG) road in Port Harcourt, the Rivers state capital.

Naija News reports that the incident occurred at about 9.0pm on Monday. The driver of the Camry car was reported to have survived the incident as he reportedly swam to safety while the female occupant drowned.

The woman died when she couldn’t get help as she was trapped inside the ill-fated Toyota Camry car.

The vehicle was recovered on Monday with the help of a crane owned by Julius Berger.

An eyewitness report revealed that the driver of the car might have his vision blurred by smokey truck directly front him and that in a desperate attempt to steer off it, he skidded into the River close to the Nkpogu bridge.

Before the rescue operation, the accident scene was cordoned off and traffic diverted back to Amadi Flats, Rainbow Town in Trans Amadi through Nkpogu bridge.

The Toyota Camry car was however recovered by a lift reportedly belonging to Julius Berger.