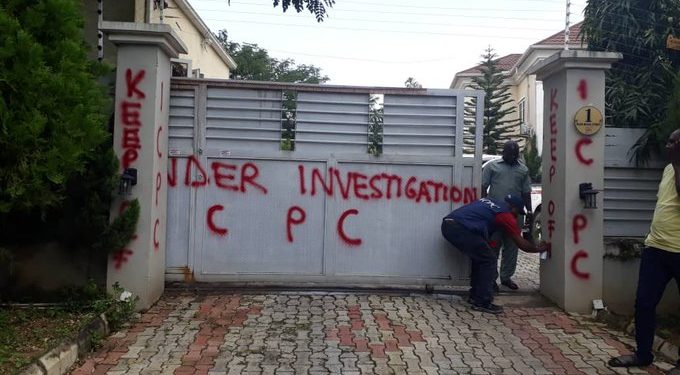 The Independent Corrupt Practices and Other Related Offences Commission, has seized properties belonging to top officials of the Nigeria Football Federation.

Others newly indicted by the investigation are Head of NFF Technical Committee, Ahmed Yusuf, and NFF General Secretary, Mohammed Sanusi.

According to reports, the NFF President allegedly owns a majority of the properties, with one of them situated in the United Kingdom.

A breakdown of the properties seized, according to a document obtained by Sports Extra, shows that Pinnick owns six, Sanusi has three, and two belong to Yusuf.

Though details of properties seized from Dikko seems not clear, as officials of the ICPC earlier seized one of his properties, located on 1, River Benue Close, Maitama, Abuja, on Friday morning.

The document listed Sanusi’s seized properties as the house beside the Mosque of Alheri School, off Tsafe Road, near Guiwa Low-cost Housing Estate, Sokoto; Plot 8001 Cadastral Zone E08 vide offer letter dated May 15, 2019 with file number KW30584; and a property at 6A, Tangier Street, off Sudan Street, Zone 6, Abuja.

A source within ICPC revealed that the investigation may extend to other officials of NFF with “suspicious property”.

“This is the first phase of the investigation. Others may be involved later but I can confirm to you that many officials of the NFF are under investigation,” the source added.

According to Punch, the spokesperson of ICPC, Rasheedat Okoduwa, debunked the reports on social media that seals on Pinnick and Dikko’s houses had been removed.

Dikko’s house was sealed on Friday morning, before officials of the ICPC again proceeded to seal Pinnick’s mansion in Park View Estate, Lagos, in the afternoon.

She said, “Our work is still ongoing. We have seized those properties and other ones. The full list on Dikko’s seized properties will be available tomorrow (Monday). The one for Pinnick and two other characters are already available. But our investigation is ongoing.”

“Both Dikko and Pinnick’s sealed properties remain seized. If the seals are removed, those that did that are not our officials. We are investigating something about them. What they have is in excess of what they have earned.”

The ICPC spokesperson also debunked the report that President Muhammadu Buhari’s Chief of Staff, Abba Kyari, was influencing the investigation.

But the ICPC spokesperson said, “If we are continuing with our work, including enforcement action, then I don’t see any influence in that regard.”

“If we are going ahead with our work, then there is no credence to the allegation. Our action shows that we are independent in the investigation.”

While speaking on the claim that the anti-graft agency didn’t get any court order before seizing the properties, she said, “There are different instances that warrant getting court orders. To seize, our (ICPC) Chairman has the power to do so according to our law.”