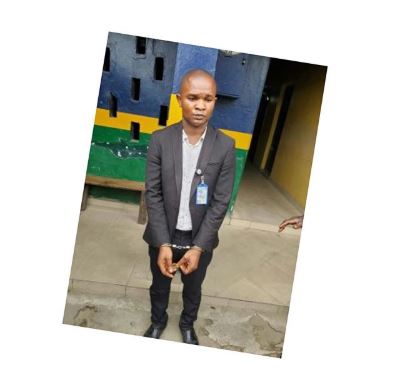 A 29-year-old man identified as Emeka Emmanuel has been arrested by the Police operatives for allegedly parading himself in a ‘borrowed suit,’ claiming to be an official of th Economic and Financial Crimes Commission (EFCC).

Naija News gathered that the ‘Fake EFCC official’ was arrested on Saturday, September 14 at the Iyana Iba axis of Lagos state.

Upon his arrest, the Fake EFCC official who was arrested in Lagos was in possession of a fake EFCC ID card which he used in parading himself as an EFCC operative.

It was gathered that the suspect duped his unsuspecting victims under false pretence of facilitating their rapid employment into the Nigeria’s anti-graft agency.

Upon his arrest, a victim identified as Olaposi Semiu who resides in Agbara, Lagos and had suffered loss in the hands of the suspect, told the Police that Emmanuel collected the sum of N51,000 from him over a month ago with a promise of securing employment for his son as an EFCC operative.

It was also discovered that as part of his business ventures, Emmanuel was found operating an illegal medical facility in his residence.

However, the suspect upon interrogation confessed to the crime levelled against him.

An online source revealed that items recovered from the fake EFCC official include medical equipment and fake certificates although the Police in the state is yet to be contacted for comments on the arrest of the fake official.