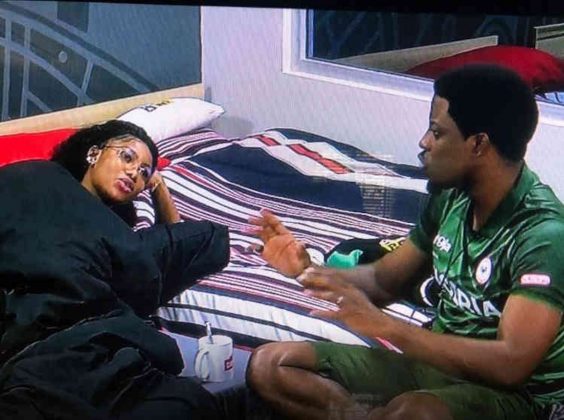 One of the housemates of the ongoing Big Brother Naija (BBNaija), Seyi has posed a threat to sue his fellow housemate, Tacha for calling him a drunk.

Naija News reports that Seyi made this threat on Sunday afternoon during a conversation with two housemates, Elozonam and Diane.

Seyi posed the threat on Sunday in just few hours to the Sunday live eviction show anchored by the host of the reality show, Ebuka Uchendu.

“For someone (Tacha) to say she has achieved more than me at 23, really? Like really?” Seyi said while talking with Elozonam and Diane.

Seyi continued: “You know, I am considering suing her (Tacha) for defamation of character. She defamed my character, but for how much?.” He asked Elozonam and Diane regarding Tacha calling him a drunk during last week’s live eviction show.

The Sugar Daddy of the BBNaija 2019 as he is fondly called, furthered said as thus: “She (Tacha) called me a drunk, I’m I a drunk?” He asked Elozonam and Diane and they both responded by shooking their heads, with the impression that he’s not a drunk.