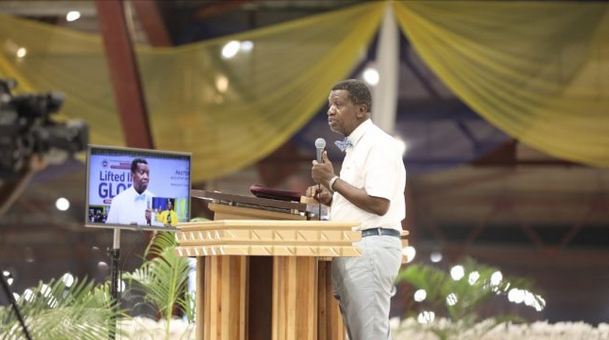 The General Overseer of the Redeemed Christian Church of God (RCCG), Pastor Enoch Adeboye, has revealed how he was saved during the Nigerian Civil War.

Pastor Adeboye said his experience at the University of Nigeria, Nsukka, during the Nigerian Civil War has taught him that retaliation leads to an escalation of the crisis.

Naija News reports that the RCCG Senior Pastor made this comment while appealing to Nigerians against reprisal attacks on South Africans over recent xenophobic attacks on Nigerians in South Africa during the September Holy Ghost Service of the church at the Redemption Camp in Ogun State, Southwest Nigeria.

Pastor Adeboye said before his message for the service with the theme, ‘Lifted into Glory’, “I want to make a very special appeal to you; I want to beg you not to think of retaliation against South Africa. And I will tell you why. I have seen a bit in my 77 years on earth.

“In 1966, just before the Civil War, Colonel (he was Colonel then) Odumegwu Ojukwu announced on radio that he could no longer guarantee the safety of those who came from outside the Eastern Region; he told all of us who were not Easterners to go home. I was a student at the University of Nigeria, Nsukka (Eastern Part of Nigeria) then.

“Our brothers of Eastern origin sympathised with us because our studies in Nsukka was coming to an abrupt end. The university authorities called a meeting after which they told us they were making arrangements to transport those of us who were not of Eastern origin back to our Regions.

“But then suddenly, news came over the radio that the students of the University of Ibadan had gathered all the brethren from the East and were determined to hold them until everybody from Western Region in our university had returned home.

“Immediately, everything changed! All our friends from the Eastern Region began to hold meetings as to how to keep all of us who were from other regions in the East until the return of all of their own brothers.
In my life, I can count three or four occasions when I had known fear in the real sense of the word. I knew it that day!

“There was a man among us from Ekiti, who was noted for expensive jokes. While we were trembling in fear, he said: ‘Well, my own case is simple, my wife has just had a son, if I die now, nobody will say I never came into the world.’

“Suddenly, the possibility of dying came to us. You don’t know what it means to be in another man’s land, not knowing what could happen overnight!

“It took divine intervention to get us across the River Niger again. The moment we noticed what was happening those who had money quickly left to board vehicles from Nsukka to Asaba.

“I had just won what they called in those days Senate Scholarship as the best student in the Mathematics Department. It meant the Senate of the University was going to pay my school fees, my allowances. I had spent every money I had because I knew money was coming and was down to zero! I had no money, even if I wanted to run away.

“Now, let me tell you one thing (and am sure many of you know it): anytime they say that a University is rioting; the people who are actually rioting are always less than ten percent of the population of the University.

“That is what is happening in South Africa; the average South African is a decent person. Those who are causing the trouble are not many.

“If you have a South African living near you, show them, love, protect them from any harm because even if the Government were to repatriate all Nigerians from South Africa; within the next two months, some will go back.

“So, for the sake of your own kith and kin: Don’t retaliate against South Africans.

“Let us leave the situation for the governments of the two countries to handle. Pray for them that God will give them wisdom, give them understanding and give them the ability to do it.”