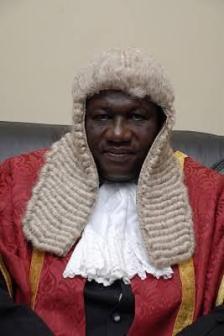 Nigerians have berated Justice Mohammed Garba over his final judgment, as the head of the Presidential Election Petitions Tribunal on the 2019 presidential election.

Naija News had reported earlier that the Presidential Election Petition Tribunal (PEPT) on Wednesday dismissed the petition of the Peoples Democratic Party and its presidential candidate, Atiku Abubakar.

Naija News recalls that PDP, Nigeria’s main opposition party, rejected the verdict of the tribunal and asked its lawyers to file an appeal at the supreme court.

Apparently displeased with the judgment, Nigerians took to the micro-blogging site, Twitter to berate the tribunal judge.

Justice Garba Mohammed just told Nigerians that you do not need certificate to become President! They have legalized illegality in this country.
Guy is a huge shame

Today's judgement is the worst I have seen in my entire life. A clear ABC case was openly subverted. Imagine how justice M. Garba interpreted section 52(2) of the EA 2010. That in his own opinion, d section doesn't empower @inecnigeria to do anything electronically.

Justice Garba just said that presenting certificates isn't necessary, just swear an affidavit that you have one ?#Technicality 101 ?

I am On my Way to High Court To swear Affidavit that I have MSC & PHD in Finance from OAU ?

Nah our Judiciary talk am oo

Although not entirely surprised @ today’s verdict against Akitu, it’s interesting to note it’s coincidence with the US 9/11 attacks. It MUST also go down in our history that it was the day Justice Garba Mohammed & d PET compromisingly destroyed the and judicial fabric of Nigeria! https://t.co/cNgFuZ7cvV

Justice Garba (JG)— who are you old man?

Joke of the century!
9hrs of exercise in futility. Who need that much to say the truth? JG https://t.co/gexef0Vg4I

You don’t need a certificate to contest for a position…
just affidavit.

Like what the actual hell!
Nigeria matter don tire me i want to leave that country.
???

So sad on the judgement passed today by Justice M. Garba and his team against PDP & its candidate Atiku. Nigeria is gone, its a pity

This is my conscience speaking, how will Justice Garba Mohammed sleep tonight?

If the 2nd Respondent has not presented his Secondary school certificate to the Army during his commission, where did the Army get it's academic qualifications quoted in form 199 by the Army?

Justice garba said presenting certificate isn't necessary just swear affidavit that you have one.
Nawa for our judiciary..#PEPTJudgement pic.twitter.com/PTXCeq6Vjm

Nigerians should take note of these names.

They are the five man panel of PEPT. They connived with the executive to rape Nigerians of our democracy 11/9/19

Justice Garba just said that presenting certificates isn't necessary, just swear an affidavit that you have one ?#AtikuBusted Again?

I am On my Way to High Court To swear Affidavit that I have MSC & PHD in Micro. from OAU ??

Nah our Judiciary talk am oo