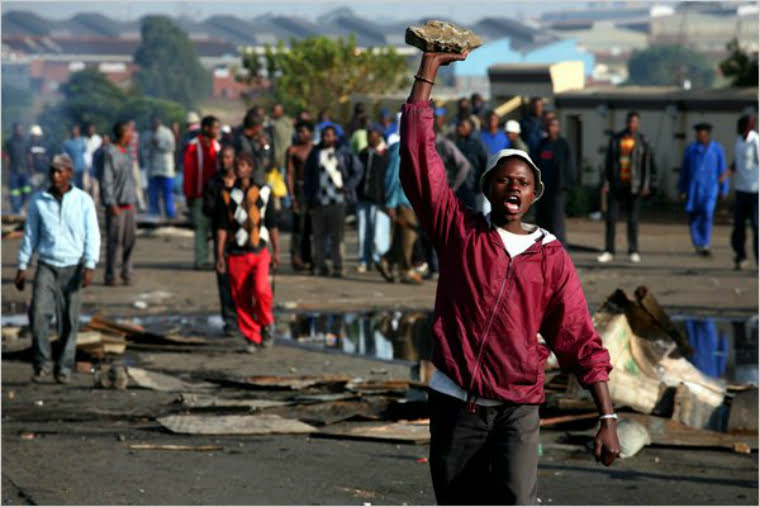 Report reaching Naija News reveals that the South African immigrations have commenced efforts to frustrate the efforts of the Nigerian High Commission in South Africa towards evacuating Nigerians from the country.

Naija News reports that the move frustrating the evacuation of Nigerians comes after an airplane belonging to Air Peace had arrived the OR Tambo Airport in Johannesburg, the South African capital since 4 a.m to evacuate the surviving Nigerians who escaped been lynched in the recent Xenophobic attacks against foreigners in South Africa.

This online news platform understands that 182 out of 317 Nigerians were evacuated from the country on Wednesday, September 11.

The Nigerians arrived the Murtala Muhammed International Airport in Lagos at about the afternoon hours of Wednesday.

Naija News understands that the Air Peace aircraft had left Nigeria since 11:30 p.m, Tuesday only to see that the Nigerians profiled for evacuation are being stopped by South Africa as with a hypocritical reason of wanting to know how they got into the country.

While speaking on the alleged frustration of Nigerians from returning to their country, an official of the Nigerian High Commission was quoted as saying; “South Africa is frustrating Nigeria. The Air Peace aircraft has been there since 4:00 am. Their Immigration started giving our High Commission problems. They said some Nigerians didn’t have papers. Immigration is arresting them, asking them to explain how they came to South Africa.

“About five minutes ago only 182 Nigerians were allowed to board the flight; the rest are being barred by South Africa Immigration. They are frustrating the Nigerian High Commission, taking the passengers away. They want to frustrate the airline and the Nigerian government. The aircraft has on, burning fuel since 4:00 am. They are not happy that Nigeria is evacuating its citizens. They don’t want the world to know that a Nigerian airline and Nigerian government is evacuating them.

“Our high Commission is having tough time with South African government. They are stopping and arresting Nigerians, saying they should explain how they came into the country.”