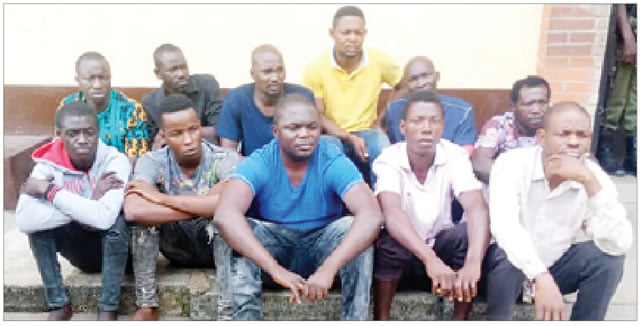 Eleven members of the National Union of Road Transport Workers have been arrested by the Lagos State Task Force on Environment and Special Offences (Enforcement) Unit for causing mayhem in the state.

The NURTW members were arrested on Saturday and Sunday for causing mayhem in the Yaya-Abatan garage, Ogba area of the state.

CSP Olayinka Egbeyemi, the Chairman of the task force, while speaking on the incident stated that weapons including, axes, daggers, broken bottles and cutlasses were recovered from the suspects.

He further noted that they would be charged to serve as a deterrent to others, who might be planning to disturb the peace of the state.

Egbeyemi charged the NURTW members to conduct themselves and not disturb the peace of other members of the public.

He stated that anyone caught disturbing the peace of the public would be dealt with in accordance with the law.

In a related story, two suspected tricycle thieves have been arrested from the Ifo area of Ogun State.

According to the report, the suspects who were identified as Sodiq Sulaiman and Saidi Ibrahim stole a tricycle with number plate JJJ 706 QF, where it was parked by the roadside in Ifo.

It was reported that the suspects were apprehended at the Cappa area of Lagos while being chased by the cops on night patrol in the Oshodi area of the state.

One of the suspects, Sulaiman, an ex-convict, in his confessional statement to the operatives, was said to have confessed that the tricycle was being taken to one Mallo in the Idi-Oro area of the state for sale at an agreed price of N40,000 before they were arrested.

He was quoted to have said, “I was just released from the Kirikiri Prison last month, where I spent seven months for not being able to produce a commercial tricycle given to me on hire purchase by the owner.”

“I trained as a tricycle mechanic for four years at Abekoko in Oyo State before I came to Lagos in 2017 and started stealing phones, bags and tricycles with Saheed Ibrahim, whom I met in the Akala area of Mushin.”

Ibrahim, was quoted to have said, “We specialised in using motorcycles to rob innocent members of the public of their valuables at night. We had stolen and sold more than 55 phones, jewellery, laptops and seven tricycles to one Mallo in the Idi-Oro area of Mushin. We sold all our stolen items to Mallo and others in Idi-Oro and Akala areas of Mushin.”

Egbeyemi urged Lagos residents to take proper care of their belongings, adding that the suspects would be charged soon.

He added that the agency had deployed operatives in strategic locations across the state to protect lives and property.