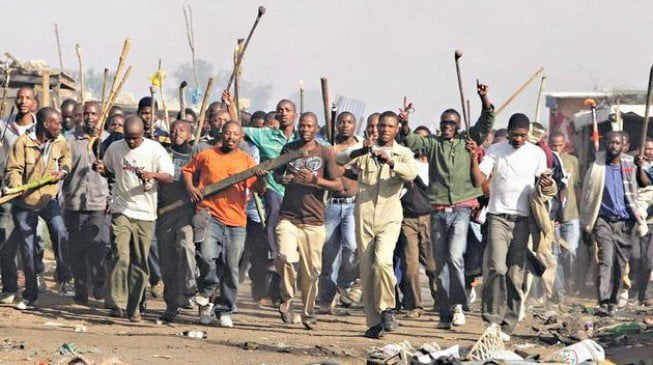 The Nigeria Union South Africa (NUSA) has urged Nigerians in the country to stay away from troubled spots where a violent protest march by the Zulu Hostel dwellers in Johannesburg was took place.

Naija News reports that a fresh wave of attacks against foreigners resume on Sunday.

Armed protesters took to the streets of South Africa to violently demand that foreigners return to where they came from.

A South African newspaper, Sowetan Live had reported that the protesters, who carried weapons such as knobkerries, were addressed Mangosuthu Buthelezi, a notable politician and Zulu tribe leader.

This is coming one week after attacks on foreigners sparked reactions across the continent.

Reacting in an interview with NAN on Sunday, the Publicity Secretary of the union, Mr Habib Miller, said it was necessary to avoid a repeat of what happened last week.

“This afternoon, the Zulu Hostel dwellers walked out and disrupted a gathering which was being addressed by Inkatha Freedom Party President Emeritus, Mr Mangosuthu Buthelezi.

“They are now marching around Jules Street towards MTN taxi rank and Bramfontein chanting `foreigners must leave the country’.

“The protest is still ongoing in different part of Johannesburg.

“We’ve warned and alerted our people and their structure through various media.

“The Police need to be proactive this time around so that lives and properties of people, especially, foreign nationals will be protected.

“Our mission in Johannesburg has been informed,” Miller told NAN on the telephone.