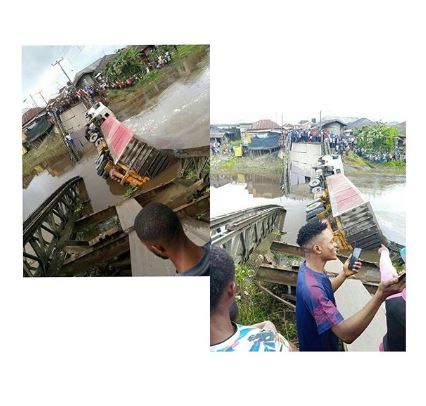 Scores of persons have been feared dead when a popular and busy bridge linking Elebele to Otuoke, all in Bayelsa state collapsed.

Naija News understands from an unconfirmed report that that the bridge collapsed in the early hour of Thursday, September 5.

It was gathered that the bridge collapsed due to the weight of a cement truck that tried crossing the bridge.

The truck conveying cement was reported to have stucked in the middle of the bridge while the bridge cracked and collapsed apparently.

Although it was unclear if the truck was a Dangote cement truck, the bridge is built over a river suspected to be flowing within the communities.

As at the time of this report, it was unclear if any casualty was recorded, however, the driver of the truck and motor-boy were said to have sustained injuries and are believed to be receiving treatments in an unknown hospital.