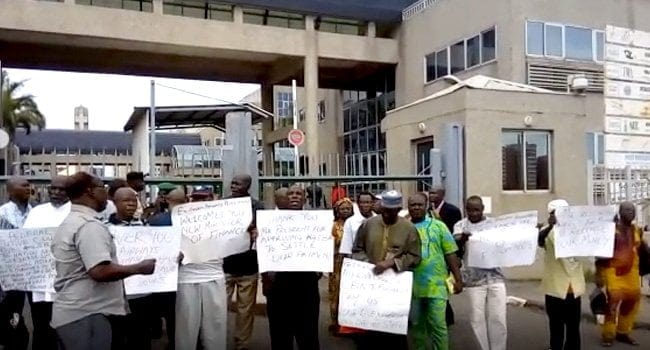 Retired civil servants in Benue state have staged a peaceful protest in front of the government house for over 12 hours.

Naija News learnt that the protest was as a result of the state government failure to pay up pension and gratuity totaling N25 billion.

The chairman of the aggrieved old retirees, under the aegis of Concerned Pensioners, Comrade Peter Kyado, who led the protesters revealed that action followed the state government’s inability to settle their monthly pension allowances and gratuities.

“We are going to sleep here. After all, we came here with sleeping materials, such as mats, camp beds. This protest is indefinite and if the government fails to address our issue, we will remain here, multiply and fill the earth until our demands are meant.

The Chief Press Secretary to the governor, Terver Akase said Governor Samuel Ortom in reaction pleaded with the protesters to be patient with the governor. He also promised that the money will be paid in due course.

“The Governor had directed that the funds be released to the pensioners in order to end pensioners’ suffering,” he said.