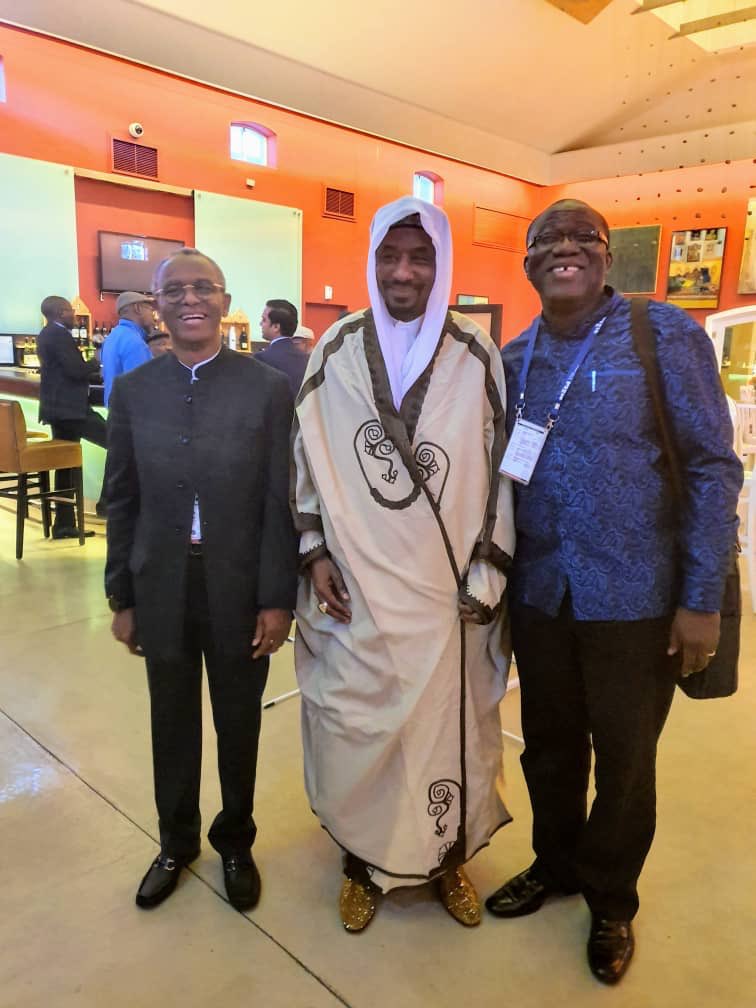 A storm of reactions by Nigerians has greeted the visit of Emir of Kano, Muhammad Sanusi II, to South Africa amid the Xenophobic attacks on Nigerians in the country.

Naija News had reported earlier that the Emir of Kano was spotted dining in South Africa alongside Governors Kayode Fayemi and Nasir El-Rufai of Ekiti and Kaduna states respectively.

The development came after Nigerians raised the alarm over the appearance of Jim Ovia and other Nigerians including a former minister Oby Ezekwesili at the World Economic Forum Africa 2019, taking place in Cape Town, South Africa.

Naija News recalls that properties including cars belonging to Nigerians in the country were set ablaze by South Africans in the wake of the Xenophobic attacks.

Apparently displeased with the attacks, Nigerians took to Shoprite premises around Jakande, Lekki in Lagos to protest the Xenophobic attacks.

Reacting to the Xenophobic attacks, the Nigerian government through Bashir Ahmad, an aide to President Muhammadu Buhari, said it was boycotting the WEF.

While the Federal Government said it was boycotting the WEF, Emir Sanusi, Governors Fayemi and El-Rufai on the other hand, attended another conference in South Africa after which they were spotted having dinner in Stellenbosch, South Africa on Wednesday, September 4.

Displeased with the visit, Nigerians took to the micro-blogging site, Twitter, to blast the Monarch and the governors.

So Mallam Nasir El rufai, Emir Sanusi Lamido Sanusi, and Governor Fayemi were all at the WEF, but @BashirAhmaad and Buharists singled out Oby because maligning her will make us forget our President can’t pronounce Xenophobia.

The lawlessness in the land is pervasive. Will any Republican Governor defy President Trump to visit a country he had declined invitation to visit based on the circumstances like we are witnessing in SA? But El’Rufai and Fayemi had to go. Total insult and disregard of PMB.

Just so you know, Madam Oby is not the only person that attended WEF in Cape Town, South Africa.

While I was calling out on Madam Oby & Jim Ovia, I didn't even know Emir Sanusi, Governor Kayode Fayemi & ElRufai were also in #WEF2019. Who says the government boycotted the event then? Aren't we a hypocritical & an unserious people? #SayNoToXenophicAttacks

Apparently, Gov. Elrufai, Gov. Kayode Fayemi, Emir Sanusi Lamido Sanusi and Amina Jane Mohammed were also in attendance at the WEF Summit. So who exactly are these guys answering to if they can go against the President's order? Except the 'boycott' was just for the headlines.

Wait. What is Emir Sanusi doing in South Africa? Come on!!! https://t.co/6YBX74JRSv

@BashirAhmaad somehow, you only noticed a former minister of Igbo extraction as the only one who attended WEF in South Africa- in this pictures are @elrufai , Emir Sanusi and @kfayemi at same Forum. You are the spokesperson of the President of the federal republic act as one! pic.twitter.com/RHdXvHnfHH