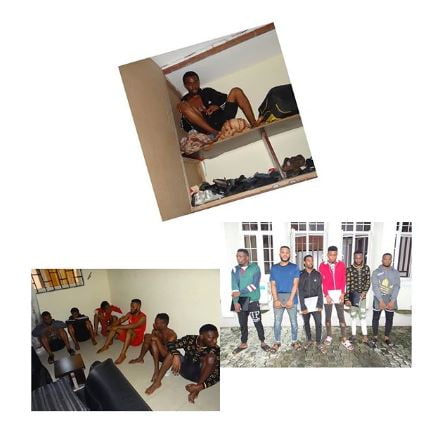 Operatives of the Akwa Ibom command of the Economic and Financial Crimes Commission (EFCC) on Monday arrested six suspects.

Naija News understands that the suspects were alleged to be specialists in hacking into Facebook accounts of unsuspecting victims and defraud persons in the compromised accounts’ contact list.

The suspects were arrested in their two-bedroom apartment on No. 54 Church Road, Off Calabar Itu Expressway, in Uyo, the Akwa Ibom State capital.

The suspects who are male are identified as; Lawrence Nnamdi-Mba Ebesike; Prince E. Udeh; Chijioke Victor; Promise Odimba; Ugbor Ifeanyi and Prince Anthony, all within 22 and 29 years age bracket.

One of the suspects was reported to have hidden in a wardrobe as at the time the EFCC operatives visited their home. However, the suspect was sniffed out by the intelligent officers who made the arrest.

During interrogation, the suspects said the apartment which serve as their home and office was rented by their leader, Ebesike. They said that they have only made about $4,000,00 from cyber fraud before the hands of the EFCC apprehended them.