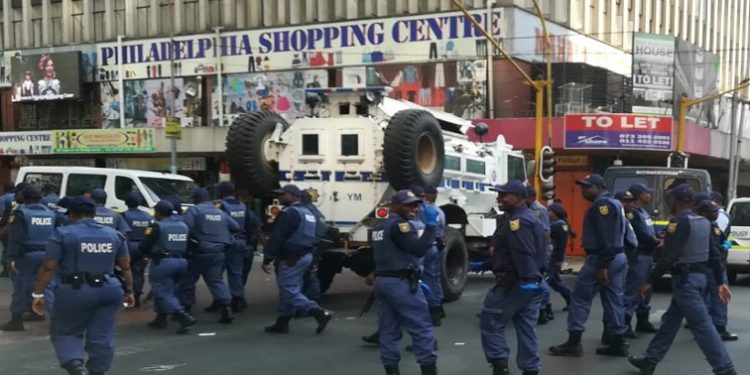 At least 90 persons have been arrested in connection with the xenophobic attacks on foreigners, especially Nigerians in South Africa.

Naija News reports that the South African government mae this known in a reactive statement on the recent xenophobic attacks in South Africa.

The statement by the South African Government Communication and Information System (GCIS), the government denounced the widespread violence and crime as a way of addressing grievances.

The statement obtained by Naija News reads; “Government calls for calm and restraint in certain parts of Gauteng and KwaZulu-Natal, as community members raise their concerns and grievances about various issues affecting them.

“No amount of grievance or unhappiness can justify the looting of shops, destruction of properties and illegal blocking of roads. Such acts constitute a criminal offence and the law enforcement agencies must respond without any fear or favour

“We are a democratic state that promotes robust dialogue and engagement with the dissatisfied communities.

“As government, we will not allow anarchy and violence to be the order of the day.

“We commend the quick response of the South African Police Services (SAPS) which has resulted in the arrest of a number of individuals.

Read Also: BREAKING: Buhari sends Special Envoy to South Africa over xenophobic attacks
“With regard to the attacks on trucks, 20 individuals have been arrested in KwaZulu-Natal after responding to incidents along major routes and known hotspots in the province.

“These arrests relate to public violence and obstruction of traffic, possession of unlicensed firearms, attempted murder and malicious damage to property.

“In Gauteng following the violence and looting of shops in Ekurhuleni, Tshwane and the Johannesburg CBD, 70 arrests have been made in connection with public violence, malicious damage to property and theft.

“The police will continue their work to restore order in the affected areas and government urges all the law-abiding citizens to continue to work with the police and isolate the criminals.

“Let us remain vigilant against fake news that are being peddled through the social media platforms to fuel tensions within the respective communities.

“Anyone found to be spreading the fake stories on social media will be dealt with accordingly.

“We cannot allow those who want to portray our country in a bad light to succeed.

“Government urges all members of the community to work together with the law enforcement agencies.

“Community members can report any criminal activities they have witnessed to the police using the 10111 emergency number.”