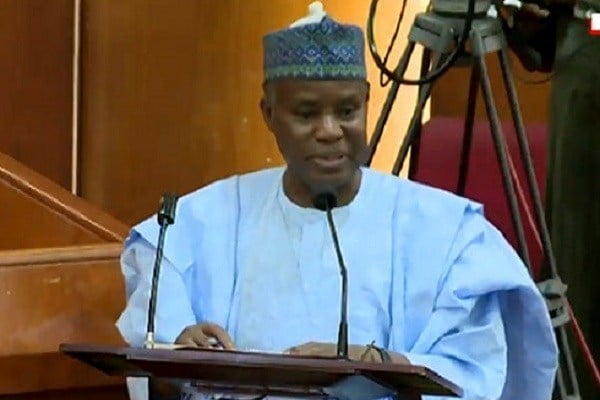 The Minister of Defence, Maj.-Gen. Bashir Magashi (Rtd), has promised to influence the federal government to improve on the welfare of officers and soldiers of Nigerian Armed Forces.

Naija News understands that Magashi (Rtd) said the aim of the improved welfare of soldiers of the Nigerian was in a deliberate attempt to enhance their efficiency and boost their morale to a high level in the cause of fighting insurgency from the soil of Nigeria.

Magashi made the promise at a dinner organised by the Nigerian Army to honour his arrival at the theatre of counter-insurgency operation in Maiduguri on Saturday.

The minister of defence said President Muhammed Buhari has expressed commitment to the payment of entitlement, pension and gratuity of officers as well as kits and other operational requirements.

In his words, Magashi said in his assurance statement obtained by Naija News that reads as thus; “I want to pass this message through the commander to the field that the Commander in Chief is willing to take your welfare and motivation more seriously than ever before.

“He is willing to improve your feeding, your kits, your operational requirements- be it weapons or otherwise in order to give you the motivation that whatever you do the government is not unaware to reward you.

“In this regard, all those who lost their lives during this operation, we see it as sacrifice and government will do something in respect of these officers and soldiers who died in the course of this war.

“We will also make sure that entitlements of officers and soldiers are promptly paid and those retired, their pension and gratuity are well taken care of,” he said.

He added that Buhari had given a marching order that the counter-insurgency operations must be executed efficiently to end insurgency in the region.

“The belief in all insurgency operations is that their tactics is to surprise you, take you unaware and create some noise that the world will see them as efficient or make their way on the people of the area per time.

“We will not allow that to continue any more, we will take the war to them and do our best in that regard.

“Very soon, the government will make all of you happy to see that once glorious Borno empire is restored to its former self,” he added.