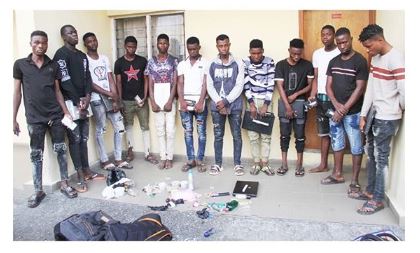 Operatives of the Economic and Financial Crimes Commission (EFCC) have arrested 12 middle-aged men for their alleged involvement in cybercrimes, popularly known as "Yahoo Yahoo."

Naija News understands that the suspects were arrested while trying to evade arrest.

The arrest was said to have followed the raid of the residence of the suspects who tried invading arrest.

Items recovered from the suspects include laptops and mobile phones. The suspect will soon be charged to court.b