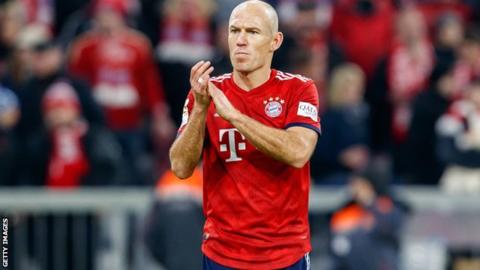 Bayern Munich legend Arjen Robben has said there is a possibility of returning to football after retirement.

Naija News recalls that the former French international announced his plans to retire from football last season and ended his decade-long career at the Bavarians by scooping the Bundesliga title and the German Cup.

When he was asked if he would consider coming out of retirement the Dutchman, 35, told NPO Radio 1: “I always say: never say never.

“Maybe in one or two months I’ll have a strange feeling that I miss the whole thing too much and will decide I have to go back.

“But, of course, it doesn’t get any easier the longer you’re retired. I do not rate the chances [of returning] very highly.”

The former winger made over 300 appearances for Bayern Munich and established a formidable partnership with Franck Ribery, who also left the club and signed for Italian side Fiorentina this summer.