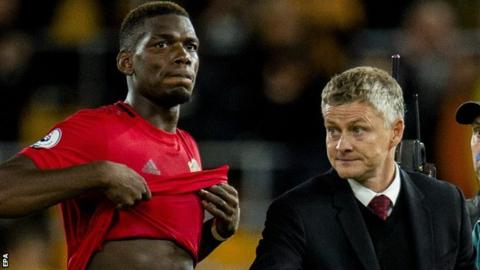 Manchester United manager, Ole Gunnar Solskjaer, has given Marcus Rashford the responsibility of taking penalties for the Red Devils.

The UK Sun reports that the decision comes after Paul Pogba missed from the spot, in Monday night’s 1-1 draw with Wolves.

Pogba won the penalty but saw his kick saved by Rui Patricio at the Molineux.

The Frenchman picked up the ball, after a brief discussion with teammate Rashford, who himself was successful against Chelsea on the opening weekend.

It is understood that Solskjaer tore into the two players over the penalty incident in the dressing room at full time.

He was also left embarrassed by their on-pitch squabble, with the world watching the clash live on TV.

The Norwegian then mandated that Rashford takes penalties in future.

Pogba, 26, was visibly frustrated at the end of the game and apologised to his team-mates in the Molineux dressing room.

His future at the club remains uncertain as the £89million man targets a move to Real Madrid.