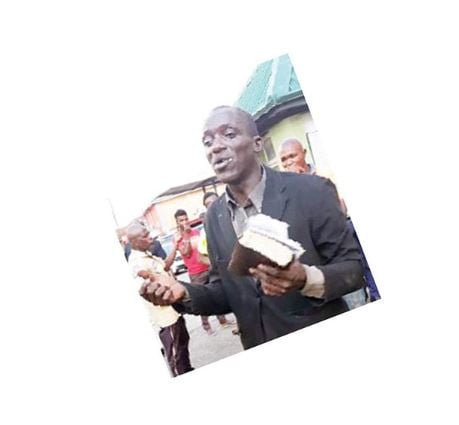 An angry mob on Thursday descended on an evangelist identified simply as Akinjide Durojaiye for allegedly stealing two phones.

Naija News understands that the evangelist was beaten by the mob for stealing the phones in an office within Femi Johnson Building at Dugbe, Ibadan, Oyo State.

This online news platform understands that the 49-year old Durojaiye, was at the office where mobile phones and their accessories were being sold, to preach the gospel to the occupants before he allegedly picked some phones from the store.

It was understood that the preacher is an evangelist at Dominion Assembly, Ilare-Ijesa in Osun State.

While preaching, Durojaiye was quoted to have claimed that he came from Ilare-Ijesa on an evangelism mission to Ibadan.

He said the ‘holy spirit’ had directed him to the office to preach to them and get some people converted.

While the occupants in the office were attentively engrossed with his preaching, the pastor was said to have jacked two bags containing phones valued at N70,000.

Some onlookers who were observing the preacher preaching to his audience apprehended him in the act.

A report obtained by Naija News revealed that Durojaiye who was been chased by the mob hid in a store in an attempt of not being lynched by the mob.

He was however apprehended while the stolen phones were recovered from him.